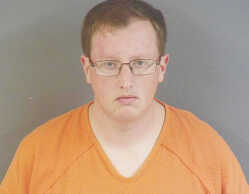 A Greenfield man has been charged with three felonies for alleged conduct committed with his girlfriend’s young son.

Mason R. McKinney, 28, has been charged with two counts of Level 4 felony child molesting–fondling or touching a child under 14 and an additional count of Level 5 felony child solicitation.

McKinney had been dating a local woman for 10 months. On Oct. 30, 2021, she filed a report with the Putnam County Sheriff’s Office saying McKinney had molested her son.

The case was turned over to the Indiana State Police, with Det. Ryan Winters conducting the investigation.

In court records filed Wednesday, McKinney is alleged to have been in the room when the victim undressed as well as touching him inappropriately.

Both the mother and the boy were interviewed by investigators.

The alleged misconduct took place either when the mother was not home or was asleep. The police report indicates two separate incidents in October.

McKinney turned himself in at the Putnam County Jail at 1:34 p.m. Thursday and will face an initial hearing before Putnam Circuit Court Judge Matt Headley.

He is represented in the case by Indianapolis attorney Adam Brower.