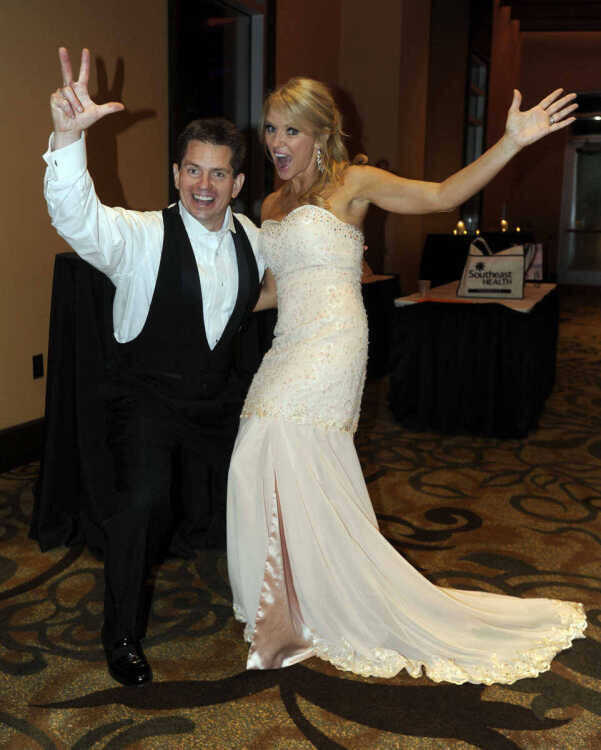 Rex and Sherry Rust pose for a photo at the Cancer Gala on Saturday, Aug. 23, 2014 at Isle Casino Cape Girardeau.

"It has been a difficult year grieving for a brother and sister-in-law as he struggled against cancer," said Jon K. Rust, co-president of Rust Communications and publisher of the Southeast Missourian. "But throughout, as was his character, Rex sought to make other people laugh. His devotion to Sherry and his celebration of friends has always been remarkable, and it was uplifting to see his affection returned to him over these last months in many, many beautiful ways. Thank you to all who reached out to him -- in letters, videos, messages and prayers. It was meaningful. Rex, more so than anything else, was fun to be around, and he will be missed profoundly."

In 2005, Rex married Sherry Johnson in a ceremony in Maui, Hawaii.

Rex attended Deerfield Academy in Massachusetts and graduated with honors after being named class president his sophomore, junior and senior years. While there, he displayed an athletic prowess that would become a hallmark. He won the Tom Ashley Award, given to the school's top football player, and was captain of the Academy's football, basketball and baseball teams.

Later, he would spend a semester studying at the London School of Economics.

In 1992, he began work with Smith Barney in New York City. He would go on to work on Wall Street and in private-equity management roles in Chicago and Virginia -- focusing on mergers and acquisitions totaling in the hundreds of millions of dollars.

In February 2001, he and Jon K. Rust were named co-presidents of the family company, while their father, Gary Rust, continued to serve as chairman of the board of the company that owns more than 40 newspapers in eight states, numerous magazines and websites, as well as minority ownership of 17 radio stations.

Rex served in a number of positions with civic, community and professional organizations. He served as president of several -- Cape Girardeau Chamber of Commerce board, Old Town Cape, Southeast Missouri State University Athletic Boosters board and Inland Press Association board. He served on the boards of American Press Institute, Page Cooperative, state Division of Youth Services, St. Louis Children's Hospital and the Guardians, a group formed to help meet financial needs of families of fallen law enforcement agents and firefighters. A member of St. Louis Young Presidents Association, he also was chairman of the finance committee at La Croix United Methodist Church.

His involvement in another effort was much less heralded.

"There is an incident some years ago when I called Rex to invite him to play golf on a Saturday. He said, 'I can't play,' and then he told me why -- he was due in Charleston [Missouri] to be part of a Saturday ministry at the prison," the judge said. "As good as he was as a civic leader and businessman -- and he was fantastic in those roles, he was an even better Christian."

A Dec. 28 letter from the City of Cape Girardeau, signed by Mayor Bob Fox and members of the City Council, hailed Rex's civic mindedness: "You have impacted the future of Cape Girardeau and ensured its success for future generations. Your contributions to the community will impact the lives of generations, and for your innovation, the City will forever be grateful."

Peter Kinder, former state lieutenant governor and state senator, honored him at a Jan. 5 meeting of Cape Girardeau Noon Lions Club, of which Rex was a member. He praised his positive example.

"I've had the pleasure of working with Rex on several projects and in several organizations. He is a big personality and fun to be around. He may break out into song or he may pause and lead a prayer. Rex and Sherry did many things behind the scenes to help people in this community. I miss Rex tremendously," he said.

"Rex is a handsome rascal, with an infectious smile that he uses to make all who he encounters feel very special. Truly a gift," he noted. "And his humor? Well, let's just say that Rodney Dangerfield doesn't have anything over Rex."

"Rex's faith in God is absolutely astounding. To be faced with the battle he has had and to remain steadfast in his belief in God has been such an inspiration to me," she said. "I've so admired Rex and Sherry's deep-seated love for one another. What a remarkable union between two extraordinary individuals who are truly the loves of each other's lives! I am forever grateful to have crossed paths with Rex."