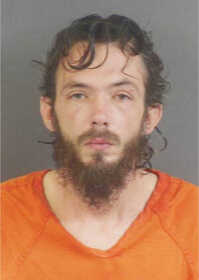 A man is lodged in the Putnam County Jail after leading police on a pursuit late Sunday night.

Greencastle police responded to a South Side neighborhood for a complaint of a suspicious vehicle, with the caller believing the occupant could be armed.

Around 11:30 p.m., officers found the vehicle in the area of Berry and Main streets and tried to initiate a traffic stop. The driver tried to elude them, going down alleyways and a variety of different roads.

At one point the driver, later identified as 35-year-old Christopher Taylor of Greencastle, stopped and got out of his vehicle, but then got back in and again fled.

Taylor led police on a winding path that took them down Martinsville Street, where he hit a curb and blew a tire, but continued eastbound to Zinc Mill Road, then County Road 200 South/Airport Road.

The pursuit then continued northbound on County Road 250 East toward Big Walnut Sports Park, where Taylor made the complete loop of the park before returning to 250 East and proceeding back southbound.

At this point, Capt. Charles Inman performed a PIT (pursuit intervention technique) with his police car to bring Taylor’s vehicle to a stop.

Though he initially tried to give officers a different name, the suspect was familiar to Inman, who identified him as Taylor.

No officers were injured and Inman’s vehicle sustained only minor damage.

GPD was joined in the pursuit by the DePauw Police Department, Putnam County Sheriff’s Office and Indiana State Police, with the Cloverdale Police Department en route when Taylor was taken into custody.

Taylor was transported to Putnam County Hospital for examination and observation.

After Taylor was released from the hospital Monday morning, Officer Alec Pettit transported him to the Putnam County Jail, where he was booked in on charges of criminal recklessness, resisting law enforcement and driving while intoxicated.