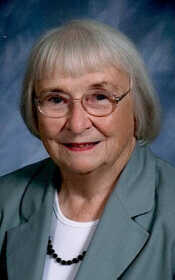 Born Oct. 13, 1931 in Greencastle, she was the daughter of Fred and Hazel (Pelfrey) Thompson.

Ethel was a 1949 graduate of Fillmore High School and had attended Indiana State University.

Ethel retired from DePauw University, where she had worked as a secretary for the political science department and the DePauw library for 30 years. She had previously taught kindergarten for three years at Stilesville.

She was a member of the Emmaus Christian Church, having taught Sunday school and been active in adult Bible study. She had served as a counselor, trainer and was active in the start of the Crisis Pregnancy Center.

She was preceded in death by her parents; husband James Hammond; a brother, Donald Thompson; and a sister, Norma Jean Champ.

Funeral services will be held at 1 p.m. on Monday, Feb. 21 at the Hopkins-Rector Funeral Home. Interment will follow at the Union Chapel Cemetery in Morton.

The family will receive friends at the funeral home from 11 a.m. until time of service on Monday.

Memorial contributions may be made in memory of Ethel to the Crisis Pregnancy Center, 1224 S. Bloomington St., Greencastle, IN 46135.