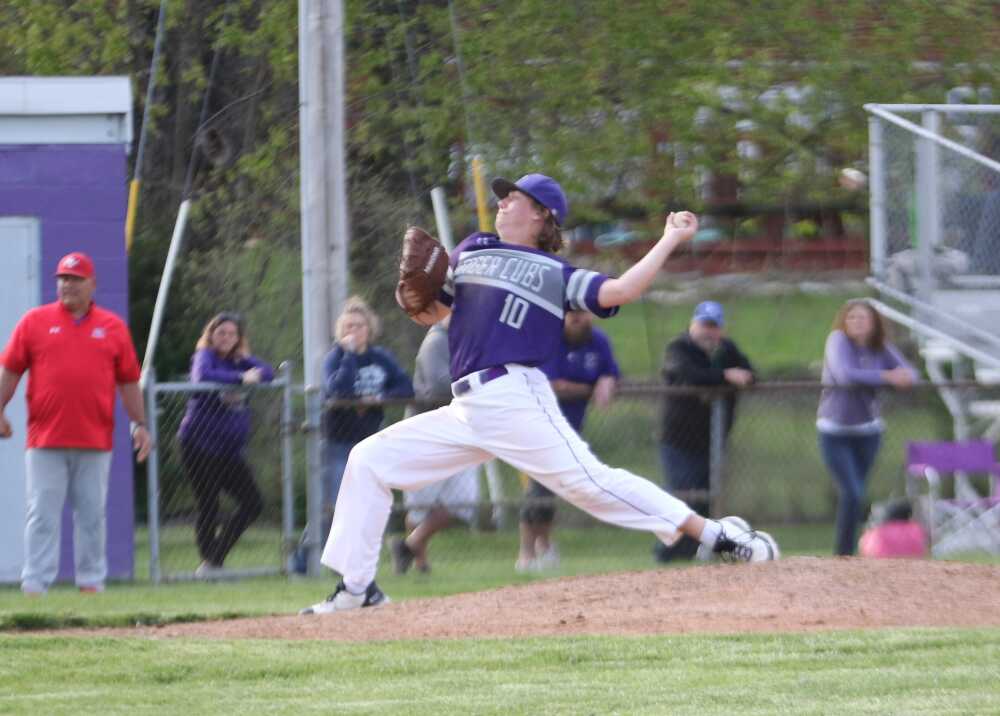 Greencastle freshman Treyten Clark nearly doled out a complete game and a win against Owen Valley Wednesday night. The one out Clark did not collect would be a costly one as the Patriots scored runs in the top of the seventh to turn a one-run deficit into a 7-4 win.
Banner Graphic/TRENT SCOTT

Greencastle was just one out away from clinching a quality home WIC baseball win over Owen Valley Wednesday night.

A chopping grounder in the infield was just out of reach of starting pitcher Treyten Clark, allowing the Patriots to tie the game and eventually tack on three additional runs, stunting the Tiger Cubs in the process 7-4.

Both teams missed scoring opportunities in the first two innings before the visitors found a run in the third inning.

Christian McDonald singled with one out, moved to third after a missed pickoff attempt and a wild pitch and scored on a Carlos Trevino sac fly.

Trevino, who toed the rubber for Owen Valley, ran into trouble himself in the bottom half of the inning.

Owen Huff led off with a single, eventually moving to third where Keifer Wilson was able to knock him in on a single to left field, tying the game at 1-1.

Walks to Ben Huff and Clark loaded the bases for DJ Wells, who beat the defense with a ball through the infield, plating two runs in the process.

Evan Alexander then managed an opposite field poke that dropped inside the line, allowing Wells to score for a 4-1 lead.

The Patriots responded with doubles from Rhet Heckman and Damon Kay, along with a triple from Rhett Manuel, cutting the lead to 4-3, though Manuel was stranded at third.

Clark and Trevino returned the game to a defensive state, quickly flying through until the seventh inning.

Calvin Dean and Bryer LeCocq singled to start the inning, only for Clark to coax a double-play out of McDonald, brining Trevino up with two outs and a man on third.

Trevino hit a chopper back to Clark, who took the sting out of the ball but was unable to coral it and the ball dropped behind the mound in a spot where no play was available, the visitors tying the score at 4-4.

Wells took over on the mound but was soon facing a bases loaded jam, one broken by a passed ball that allowed Conner Rogers to score before a Kay single plated two more runs to pad the Patriot lead.

McDonald quickly closed things out on the mound to end the game and pick up the win, having come in during the sixth inning.