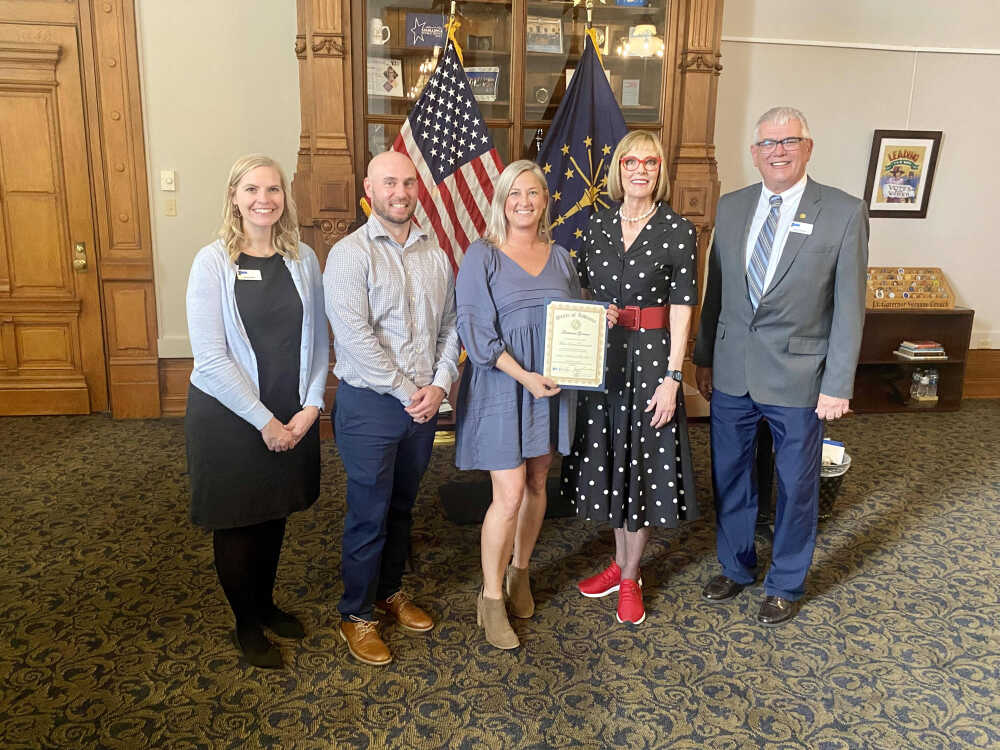 Main Street Greencastle has existed as an organization for longer than the State of Indiana has had a Main Street program.

The local organization was founded nearly 40 years ago in June 1983, while the Indiana Office of Community and Rural Affairs (OCRA) did not found and staff a state-level program until 1985.

All the same, recognition from the state is important to organizations like Main Street Greencastle in their quest to revitalize downtown areas.

As such, the Greencastle organization received quite an honor earlier this spring when it was recognized as an Indiana-Accredited Main Street by Lt. Gov. Suzanne Crouch.

Main Street Executive Director Mike Richmond and President Alison Beauchamp were on hand in Indianapolis to pick up the award, along with representatives from 11 other Main Street organizations that were honored with various levels of accreditation.

“The Indiana Main Street program continues to be a strong partner of downtowns throughout our great state,” Crouch said. “It sparks economic growth by expanding businesses, creating jobs and attracting private and public investments. Congratulations to each community and local Main Street program for attaining these designations, and for their commitment to revitalizing and enhancing their community’s unique heritage and features.”

Accreditation actually comes in three tiers, which were established by Indiana Main Street in conjunction with Main Street America back in 2019.

Receiving National-Accredited Main Street, in which a community meets accreditation standards set forth by Main Street America, were The Heart of Lebanon and Main Street Richmond.

“Congratulations to these 11 communities on earning an Indiana Main Street designation,” OCRA Executive Director Denny Spinner said. “Since 1985, the Indiana Main Street program has been instrumental in providing resources to cities and towns to advance their downtown economic development. I look forward to seeing what these communities accomplish in the future.”

“Each of those four pillars needs to have a plan developed, and the organization needs to be doing certain things with them.”

“We have historic preservation in spades here,” Richmond said. “(HPS President) Phil Gick has done a great job with that, and we leaned on Heritage Preservation Society heavily in the process.”

That process included 82 questions covering topics such as what Main Street Greencastle does, when it was founded, who is involved, a list of buildings in downtown, facade tracking and business tracking.

“We have an awesome understanding, even more than we did before, of what’s going on downtown,” Richmond said.

All of which helps Main Street Greencastle in its stated goal to “develop community partnerships in order to create and support projects and events that capitalize on downtown’s historic architecture, to be enjoyed by the community and visitors, as well as support our local businesses and organizations.”

In recent years, Main Street has made its name with much of the public by staging First Friday events in warm weather months, but its goals go further as it highlights local artists and encourages residents and visitors to support local businesses and build pride in the community.

State accreditation should help Main Street build influence in Greencastle and beyond.

Richmond said the new level gives Greencastle “a more direct line of communication” with Indiana Main Street. It also opens the local organization to more materials, such as how to create sign ordinances and grant programs, as well as additional grant opportunities.

Local officials already have their eyes on the next step.

“Now that we’re statewide accredited,” Richmond said, “we are on a three-year wait period before we can apply for national accreditation, which we are definitely interested in pursuing.”

That would put Greencastle in some exclusive company, as there are only 17 nationally-accredited organizations in Indiana.

The current level is no slouch either, as just 23 others have that designation.

For now, Main Street Greencastle will continue with current programming such as First Friday and expansion of its Piano Project and lighting projects.

“A big part of this is being able to increase our programming locally and to increase funding,” Richmond said.