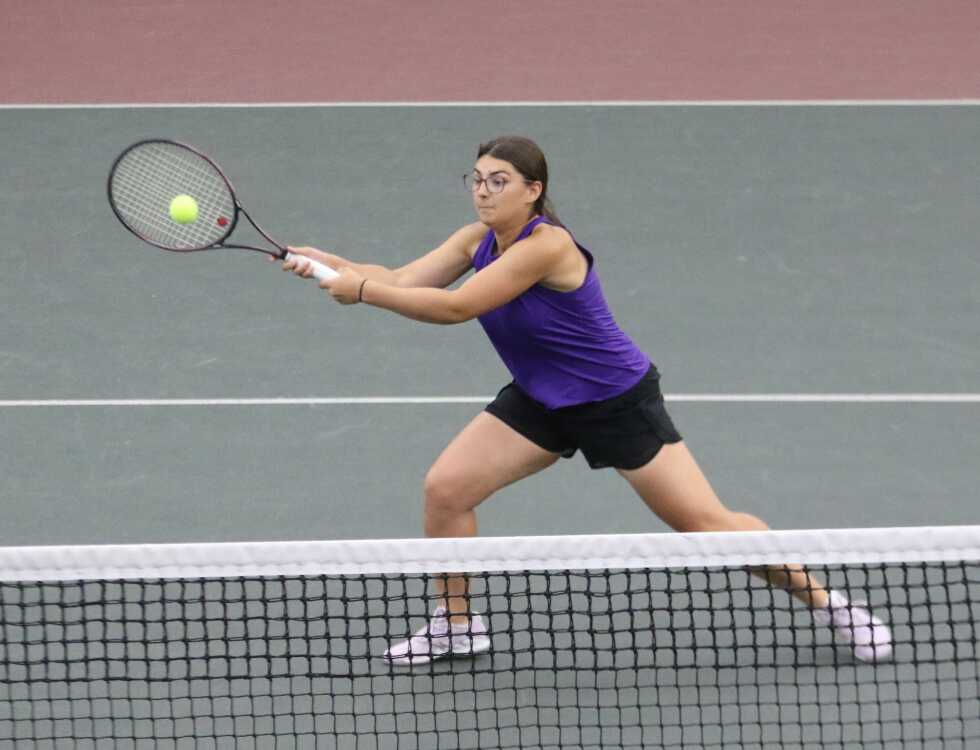 With quick reflexes at the net, Greencastle's Savannah Black wins a point at No. 2 doubles in Friday's sectional final against Owen Valley. Black and teammate Addison Fowler defeated Madysen Dill and Alexandria Sartella 6-3, 6-3 to win the crucial third team point that lifted the Tiger Cubs to a sectional title with a 3-2 win over the Patriots.
Banner Graphic/TRENT SCOTT

As Greencastle girls’ tennis coach Annette Munoz had said the previous night, it was going to take a lot for the Tiger Cubs to lose against Owen Valley in the final of the IHSAA Greencastle Girls’ Tennis Sectional.

High winds throughout Friday forced the championship back to the DePauw University Indoor Tennis Center, the site of the other three matches in the sectional, and the hosts came out firing, taking leads on all five courts against the Patriots.

Not all the leads held up but Greencastle made three stick to defeat Owen Valley 3-2 and win a second-straight sectional title.

“It was a great night to have a deep team,” Tiger Cub head coach Annette Munoz said. “No. 2 doubles held strong through; the last time we faced them, they lost in three sets and tonight, they held through in two sets and finished strong.

“It was nice to have more positions winning than just singles. We have youth in our doubles and they are figuring things out. They are playing their best tennis this year at the right time.”

The final was a rematch of a meeting from nine days prior where Owen Valley had won 3-2, the second time in as many nights that Greencastle needed to reverse a loss from the regular season.

As had been the case throughout the sectional, the Tiger Cubs picked up early points through their singles play as Sophie Riggle claimed the first point of the match, defeating Elizabeth Johnson at No. 3 singles 6-1, 6-4.

Maddie Landry followed with a 6-3, 6-0 win over Haley Frank at No. 1 singles to make it 2-0 in the match for Greencastle, which needed just one more point to secure the sectional.

“There’s not a single girls on the team playing the same position as last year,” Munoz noted. “We have three varsity returners from last year and it’s outstanding to see how headstrong the singles players have been all the way through.

“For (Maddie) and (Sophie) to step up and maintain that focus, it was outstanding we were able to pull this off as a full team tonight.”

Caroline Gooch started off hot against Ines Hidalgo Munoz, taking a 5-1 lead in the first set before the Patriot No. 2 singles player changed gears, hitting shots that quickly put Gooch on the back foot.

Hidalgo Munoz would turn the set around and win in a tiebreak, winning the match after a hard-fought second set 7-6, 6-4.

“In Caroline’s last match against (Hidalgo Munoz), she only had a few games won, so to play a tiebreaker and a close second set, it was an outstanding match,” Munoz said. “She worked hard on how to play this girls, wanted to be competitive and was so to the end.

“I’m impressed with how she adapted to an unexpected stroke coming at her with such spin and slice. Caroline had to work really hard tonight and I’m really proud of her.”

On the doubles’ courts, the No.1 pairing of Liberty Amis and Bella Monnett stayed a step ahead of Grace Coryea and Breanna Davis for the bulk of the first set, holding a 5-4 lead before the visitors won the final three games to win the first set 7-5 and eventually the match with a 6-3 win in the second set.

“(No. 1 doubles) were much better tonight,” Munoz said. “They have even more to grow on for next week and we look forward to playing in the regional.”

It was at No. 2 doubles where Greencastle found it’s winning point though the combination of Savannah Black and Addison Fowler.

The duo, new to the varsity lineup and only playing their 10th match together as a pair, had lost to Madysen Dill and Alexandria Sartelle in three sets the previous week and were in no mood to do so again, winning in two decisive sets 6-3, 6-3 to claim the sectional-winning point.

“For them to develop into a pretty strong doubles team and reverse the result from last week was great,” Munoz said. “They were encouraging each other, they were hustling to every stroke, making good shot choices and finished strong.”

Now in the position of being the team looking to hold a win from earlier in the season, Munoz

“We just need to keep the same practice regimen and the same development of how we play versus only worrying about winning,” Munoz said. “We have to play point-to-point and keep our focus through the whole match.

“I feel we’re going to be very competitive on Tuesday.”