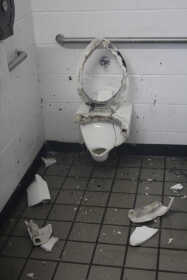 A toilet in the restroom facility at Robe-Anne Park is in pieces after a sweatshirt was stuffed into it and lit on fire Wednesday.
Banner Graphic/BRAND SELVIA

A toilet in the restroom at Robe-Ann Park in Greencastle was destroyed Wednesday afternoon after a shirt was stuffed into it and lit on fire.

First responders were dispatched to the park at about 1:25 p.m. for a reported structure fire. The Greencastle Fire Department arrived soon after and found a sweatshirt stuffed into one of the women’s toilets and ablaze.

While firefighters were able to extinguish the fire, the toilet cracked into pieces due to the heat making the porcelain brittle.

Other than that to the toilet, no other damage to the facility was found.

The parks department announced that the facility will be closed and that a portable restroom will be in place until further notice.