‘Power of endowment’ stems from taking the long view 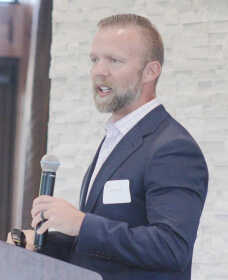 Speaking on the nature of investing for endowments, Mason Investments Managing Director Jame Ross explains how the focus for community foundations is to grow their assets even as they give generously. Mason was the meal sponsor for Tuesday’s Putnam County Community Foundation annual business meeting and luncheon.
Banner Graphic/JARED JERNAGAN

Those who have spent much time in an Indiana community might now know it, but the prevalence of community foundations in the Hoosier State is not the norm.

Those visits include Greencastle, as Mason advises the Putnam County Community Foundation on its $43 million in assets. Mason also sponsored Tuesday’s meal at Tiger Pointe Country Club, which was prepared by Almost Home.

Discussing “the power of endowment,” Ross laid out a question he intended to answer.

“What goes into creating something that lasts forever?” Ross asked.

He said there is an easy part to this, which is the buying and selling of investments.

“We provide a lot of guidance beyond, ‘buy this, sell that,’” Ross said.

The harder part, Ross noted, cannot be quantified. It’s people and relationships. It’s strategy, discipline, patience. It was on these latter three he focused much of his talk.

Choosing $37 million — the Foundation’s assets at the beginning of 2021 — as a base figure, Ross noted how through a sound strategy, PCCF could spend all of that money and still have that amount invested.

This might seem hard to believe, particularly at a time when inflation is through the roof and Wall Street is volatile, but the key is taking the long view on investing.

“Why is no one at Mason or the Foundation panicking this year?” Ross said. “I’m asked, ‘What should we do?’ The answer is, ‘We already did it.’”

What happens is that years like 2021, which was a moneymaker for the Foundation, support it through down years, meaning PCCF and entities like it don’t have to hang out the “Closed” sign when things don’t look so rosy — like 2022 so far.

“What happens in a year like this is we still give away money,” Ross said.

He noted that many individuals and entities go through a cycle of accumulation, distribution and liquidation. However, the idea for a community foundation is to avoid the latter.

“The Community Foundation goes through accumulation and distribution at the same time, and there is no liquidation,” Ross said.

Still, discipline and sticking to the plan are key.

“Last year was a banner year,” Ross said. “The interesting thing about that is the things that did well last year aren’t doing well this year.”

Ross also noted that modeling the future of the Foundation has to be based on the investment and distribution of what’s already on hand, not the expectation of future giving.

“Tomorrow someone could walk in and make a $5 million contribution. It happens ... no pressure,” he said with a laugh.

With that in mind, years like last year, in which the Foundation’s assets grew by nearly $6 million, continue to build for the future.

“What we know is this strategy works,” Ross said. “What that means is the Foundation will be able to continue to give money away over a long period of time.” 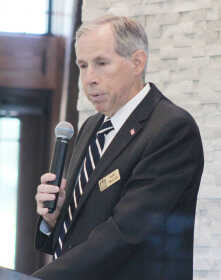 It all contributes to the enduring nature of Community Foundation contributions noted by President Jeff McCall earlier in the program.

“When donors give to the Community Foundation, you make a permanent and growing difference in our community,” McCall said.

Specific details of the Foundation’s finances were shared by Treasurer Kyle Beasley and are available in the Putnam County Community Foundation 2021 Annual Report, which was distributed at the luncheon.

Those interested in learning more about the Putnam County Community Foundation or viewing the report may call 653-4978, visit https://pcfoundation.org/ or stop by the office at 2 S. Jackson St., Greencastle, between 8:30 a.m. and 5 p.m. on weekdays.