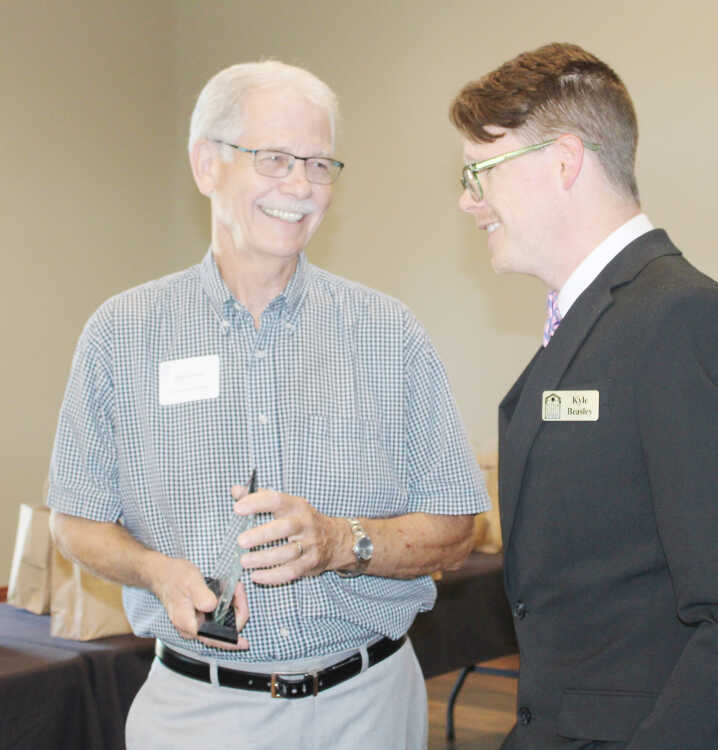 Having been surprised with the Spirit of Philanthropy honor by the Putnam County Community Foundation Tuesday, Alan Zerkel (left) accepts congratulations from PCCF board Treasurer Kyle Beasley.
Banner Graphic/JARED JERNAGAN

It takes a lot to pull the wool over the eyes of a high school principal.

Perhaps, then, in the eight years since Alan Zerkel retired as North Putnam High School principal, those skills have slipped a bit, as he had no idea he was going to be honored with the Putnam County Community Foundation Spirit of Philanthropy Tuesday at the PCCF annual business meeting and luncheon.

Neither the meeting invitation from PCCF Community Development Director Dean Gambill nor other clues tipped him off.

“I thought Dean invited me here to take the tables down and put chairs away,” the surprised and self-deprecating honoree said. “When my family walked in, I thought, ‘Good. I’ll have help.’”

There was obviously a bit more to it, though, giving Zerkel a pleasant surprise.

“Over the years, a number of people have pulled one over on this high school principal,” Zerkel later admitted.

One thing that hasn’t been in doubt, though, in 40 years as an educator and eight years since, is Zerkel’s caring for and commitment to people. That is what earned him his latest honor.

“It’s just an awesome feeling. No, I didn’t expect it,” Zerkel told the Banner Graphic. “I certainly didn’t campaign or anything for it. It’s just something I like to do, to be a part of things. I think part of it came from me being in education for 40 years, around people constantly. So when you retire it’s like, ‘Oh, gosh. I don’t want to just stop. I want to be with people doing something.’

“Of course, then, the other part of it is, I didn’t say no enough,” he added with a laugh.

Indeed, Zerkel has not said no all that much, as his involvements will testify. In introducing the award, PCCF Vice President Marianne Savage listed some of his commitments — Putnam County Public Library, Beyond Homeless Inc., Greencastle Kiwanis, North Putnam High School, Real Men Read, EDGE 21, Roachdale Christian Church and the Heritage Lake Scholarship Fund. 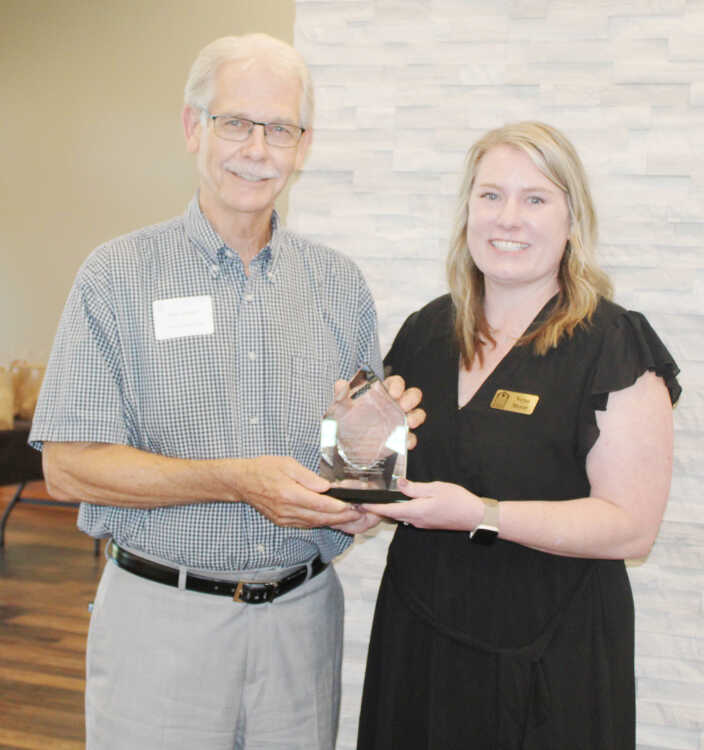 Having remained heavily involved in the community in the eight years since he retired as North Putnam High School principal, Alan Zerkel accepts the Spirit of Philanthropy award from Putnam County Community Foundation Executive Director Neysa Meyer. Zerkel is the 20th person so honored since 1994.
Banner Graphic/JARED JERNAGAN

For the Community Foundation, Zerkel spent a pair of three-year terms on the board from 2016-21. During that time, he spent two years on the executive committee as board secretary in 2020 and 2021. Additionally, he was on the Philanthropy Development Committee in 2016-17 and the Scholarship and Educational Attainment Committee since 2017, having served as chairman last year and continuing on the board to this day.

Even when Zerkel “leaves” something, he doesn’t exactly leave.

Likewise, Zerkel formally retired from education in 2014, but only recently resigned a position in student services at Area 30 Career Center, where he continued to mentor high school students from 2015 through 2022.

Even a search of his name on bannergraphic.com reveals more than 60 stories containing the name “Alan Zerkel” since his retirement in May 2014 — not one of them in Putnam Scanner.

This is just the kind of commitment PCCF seeks when it chooses a Spirit of Philanthropy, an award not necessarily bestowed every year.

“It’s only awarded when someone truly remarkable rises to the top,” Savage said.

The award was last bestowed in 2020, when both Todd Lewis and Vivian Whitaker were feted. These two were also briefly noted on Tuesday, as there was no in-person annual meeting since 2019. 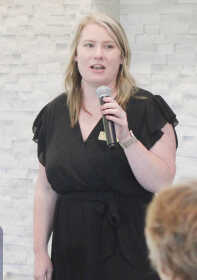 Like many of these who came before, Zerkel didn’t give of his time, talent and treasure for recognition.

“I just enjoy it. It’s something I like to do,” Zerkel said. “This was just a huge surprise. I hadn’t expected it.”

The Spirit of Philanthropy presentation was not the only highlight of Tuesday’s event at Tiger Pointe Country Club. The Foundation took some time to celebrate its successes in the last year, a period that included the largest single donation in PCCF history — $500,000 to support the Greencastle/Putnam County YMCA project. 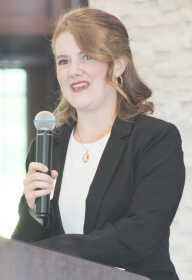 Even having an in-person luncheon following the COVID-19 pandemic was a small victory for new Executive Director Neysa Meyer, her staff and board.

“This is the first time we’ve gathered in a few years,” Meyer said. “So thank you for being here.”

Among the successes celebrated were the awarding of grants and scholarships, with Secretary Kate Knaul noting that more than $1.4 million was awarded to more than 50 students through 44 different programs.

“I think I have the best job,” Knaul said. “(Other) folks have worked very hard to grow the endowment. And I get to give it away.”

One of the big recipients is recent South Putnam graduate Catherine Hodge, who was named the 2022 Lilly Endowment Community Scholar, guaranteeing her full tuition and fees for four years of attendance at any Indiana college or university.

At the time of the award in December, Hodge shared with the Banner Graphic her plans to attend Purdue University.

On Tuesday, however, she noted that prior to the award, she had limited her college search to public universities, based on those she felt she could afford. 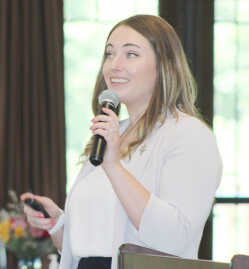 “This scholarship allowed me to go anywhere (in Indiana) I wanted to pursue my education,” Hodge said.

“I’m so grateful to be attending Rose-Hulman, something that wouldn’t have been possible without the Lilly Scholarship and the Community Foundation,” Hodge said.

Additionally, the generosity of the community, through the Foundation, is benefiting other students.

Earlier this month, PCCF and Ivy Tech Community College announced a $100,000 gift to the Ivy Tech Foundation in support of students at Ivy Tech Greencastle.

Rachel Mullinnix, executive director for the Ivy Tech Foundation in Terre Haute and Greencastle, explained how the PCCF gift came at a time when Ivy Tech was figuring out how to best serve the Greencastle campus after it was realigned from Indianapolis to Terre Haute last year.

“We’re trying to be as flexible and reactive to our communities’ needs as possible, but none of that would be possible without donors like the Putnam County Community Foundation,” Mullinnix said.

In this case, the $100,000 is going toward three funding priorities at the Greencastle campus — seamless educational pathways, accessible education for all and workforce alignment.

Specifically, the first of four distributions of the money will go toward:

• $20,000 to expand the enrollment capacity for the School of Nursing,

• $11,000 to support the continued growth and program needs of the Associate of Science Accelerate Program (ASAP) and

• $9,000 to fund scholarships for students to receive a laptop.

Mullinnix characterized it as part of an ongoing partnership between PCCF and Ivy Tech, one that has seen the Foundation donate more than $500,000 since 2007, making it the largest single donor to Ivy Tech Greencastle over that period.

“They came alongside us and said, ‘Our community needs this. We’re going to help,’” Mullinnix said.

It illustrates just one part of an ongoing commitment to the community by PCCF, one that should be carried into the coming years by several people who were reappointed to their positions on the board of directors: Savage, Kyle Beasley, Mary Gould, Jennifer Jackson, Amanda Laney and Dianna Whitlock.

These will also carry on the vision of retired board members, several of whom were recognized as honorary board members during Tuesday’s proceedings, including Debbi Christy and Ken Eitel from 2019, Mitch Proctor and Rick Bittles from 2020 and Jeff Blaydes, Michael Goss and Zerkel from last year.