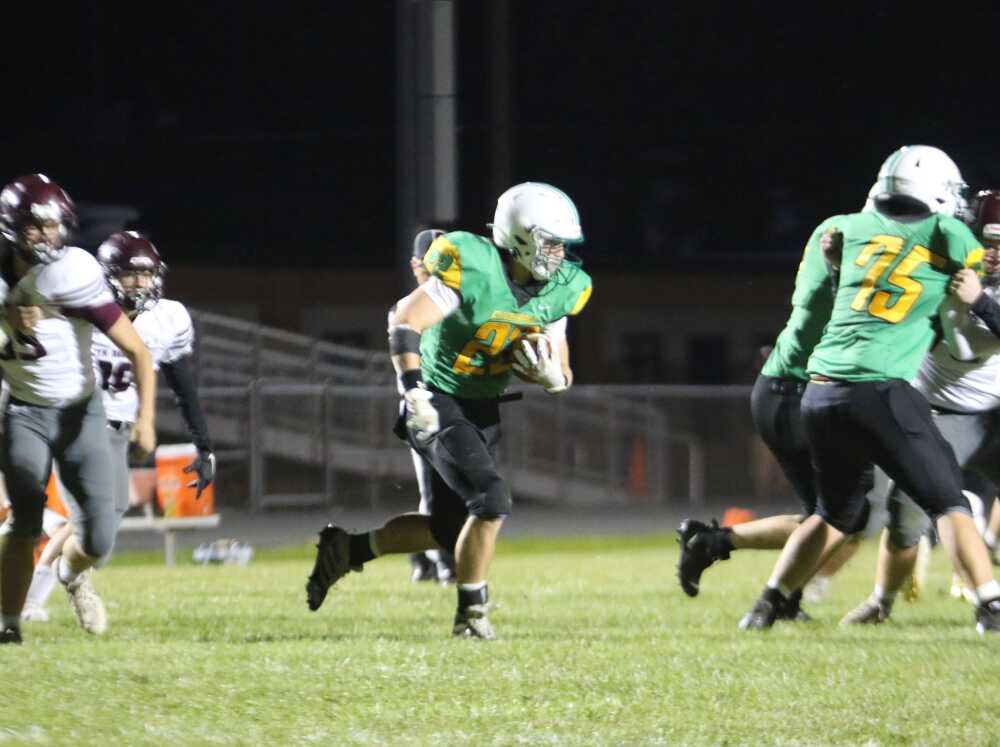 Cloverdale running back Levi Johnson looks for some running space during Friday night's homecoming game against South Decatur. Johnson had 81 yards on 16 carries in the Clovers' 36-19 loss to the Cougars.
Banner Graphic/TRENT SCOTT

CLOVERDALE Ė When teams go through tough times, itís often self-inflicted wounds that do the most damage in a contest.

Hosting South Decatur, located 15 minutes southwest of Greensburg, on homecoming, Cloverdale fell behind 21-0 yet managed to trim the gap to 21-13 in the third quarter.

Continuous penalties, including several personal fouls, constantly hampered the Clovers and Cougar back Corbin Johnson scored his third and fourth touchdown of the game to secure a 36-19 win for the visitors.

ďWeíve got to get better physically, mentally and emotionally,Ē Cloverdale head coach Tyler Lotz said. ďJust like one of my assistant coaches and I were talking about, emotionally we have to control things.

ďWe have to be more mature when things arenít going our way and quit looking for an excuse or have a victim mentality. We just have to play football; weíre going to start seeing changes if guys donít want to play or donít want to play hard.Ē

South Decatur received the opening kickoff and quickly marched into Cloverdale territory behind the legs of Johnson, who amassed 53 yards on four carries.

A bit of trickery backfired, however, and a double handoff was dropped with Jaxton Helton securing the loose ball.

The Clovers punted after a three-and-out and the Cougars quickly converted, first getting a 40-yard run from Rhett Martin before Johnson ran for 17 yards on third-and-11, setting up a 10-yard scoring run for Tyler Bishop and a 7-0 lead.

Cloverdale used a 28-yard pass from Tayt Jackson to McGuire Lee and a 15-yard run from Levi Johnson to move into South Decatur territory before a personal foul derailed the drive and forced a punt.

Martin notched a 39-yard drive to start the next Cougar possession before Corbin Johnson ended the quarter with a 23-yard run off the right side to double the lead.

A pair of holding calls, one of which was taken in lieu of a personal foul, ended the next Clover drive while a personal foul for roughing the punter extended the ensuing South Decatur drive after the visitors had been stalled by a block in the back penalty.

The Cougars took advantage of the extra life as Corbin Johnson converted a fourth-and-three with a 14-yard run off the left side to make it 21-0 with 7:08 remaining in the first half.

ďWe knew (South Decatur) was going to run the ball as thatís all we saw on film,Ē Lotz said about the Cougar game plan. ďWe also knew they would see our film against Cascade and North Putnam and watch us not be able to defend the run.

ďWe practiced it all week and we didnít execute well on defense. We didnít contain who we needed to on the outside and we were the nail more often than the hammer.Ē

A pair of personal fouls against the visitors helped Cloverdale get on the scoreboard, moving from its own 29-yard line to the South Decatur 10-yard line in five plays.

Jackson would find Lee after starting left and rolling back to his right for 15 yards and a score to make it 21-7.

Despite kicking the ball out of bounds and giving up three first downs, the Clover defense was able to hold the Cougars out of the end zone to end the half.

More penalties helped the hosts get the second half off on the right foot as South Decatur bailed out Cloverdale with a personal foul, negating the damage done by a holding penalty against the Clovers, eventually leading to a three-yard sweep from Jackson to cut the lead to 21-13.

Corbin Johnson continued to keep the Cougars moving forward and a personal foul face mask helped trim the final few yards off for the sophomore, who scored from eight yards out and added the conversion to restore the two-score lead at 29-13.

Cloverdale converted on one fourth down but failed on the second to hand South Decatur the ball on downs at the hostsí 25-yard line.

This time, despite another personal foul against the Clovers, the Cougars were halted at the Cloverdale eight-yard line and a pair of personal fouls against the visitors soon had the hosts into South Decatur territory after Jackson hit Lee for 19 yards.

Jackson was intercepted on the next play by Brady Lane but the Clover defense stuffed the visitors on three-straight plays then blocked the ensuing punt.

Despite a sack and a holding call on the same play, Levi Johnson got 12 yards back on a run and Jackson raced to the right on the zone read and scored from 14 yards out, though the failed conversion left Cloverdale still behind by two scores at 29-19.

ďLevi and Tayt being sophomores, our backfield is going to be good the next couple of years,Ē Lotz said about the quarterback and running back. ďLevi didnít play as a freshman but that kid has some great talent.

ďIt comes down us making holes and giving him opportunities, something we did a bit tonight. Leviís gotten better on both offense and defense, is one of our hardest workers and is a great leader in terms of keeping guys in check and not allowing guys to get down.Ē

Cloverdale tried to put one more scoring drive together, getting a slice of luck when Heltonís lateral to Levi Hilton hit the deck, only for the latter to get to the ball first and gain 35 yards.

Two more big penalties, a chop block and intentional grounding, saw a fourth-and-goal from the 40 end with Jackson losing the ball on a sack and Sebastyn Muckerheide came up with the fumble recovery.

Cloverdale travels to Greencastle next week to complete its round of Putnam County matchups with Lotz noting again that internal improvements had to come before necessarily scheming for the Tiger Cubs.

ďAt this point, we know the schedule doesnít get any easier,Ē Lotz said. ďWe have got to focus on us, continue to get better and not worry so much about who weíre playing.

ďWe have to get better at football because physically, mentally and emotionally weíre not there yet and we have to keep getting better at those things.Ē