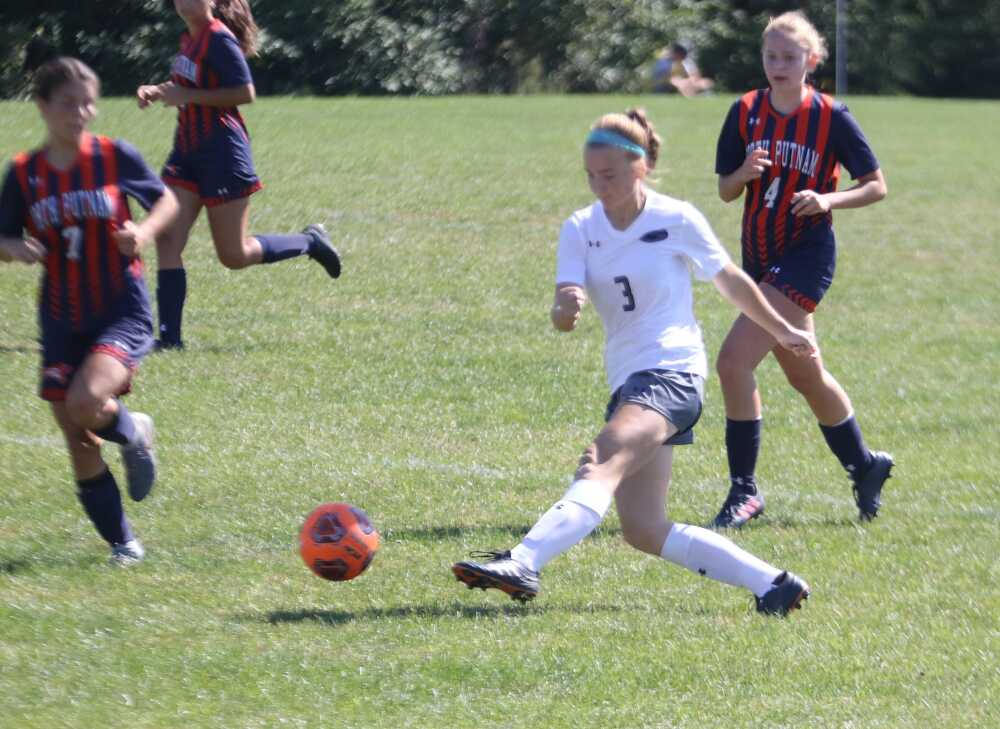 BAINBRIDGE – The only thing standing between Greencastle and a WIC Girls’ Soccer title was North Putnam Saturday afternoon.

It wouldn’t take long for the Tiger Cubs to clear the last hurdle for conference glory, hitting four goals either side of halftime for an 8-0 win to complete an undefeated run league play.

The opening goal came just before seven minutes had elapsed after Riley Wainman got on the end of a Zoey Doan ball, aiming to round Adelia Thomas in goal and while the plan didn’t come off entirely, Wainman’s last touch was enough to get the ball over the line and in for a 1-0 lead.

Greencastle continued to press forward but Thomas was able to collect several tame shots and keep the score at 1-0 until 15 minutes before the break.

Following a rare foray for North Putnam toward the Tiger Cub goal, Bella Monnett’s clearance found Carissa Trigg, who flew up the right channel, eventually squaring back to Penny Cummings, who tapped home the second goal of the match.

Claire Langdoc made it 3-0 four minutes later, turning sharply on a snap throw-in to guide a shot across Thomas and in.

Ninety seconds later, Cummings hit a clever reverse ball that Aleeyah Johnson strode on to, finishing past Thomas for a four-goal lead at halftime.

Greencastle started the second half off quickly as well with Ali Dobbs and Evelyn Briones running a series of one-twos up the right channel, the former teeing up the latter for a fifth goal.

Briones would add the sixth, riding off a length challenge from Addison Everman before storming up field and slamming home past Thomas.

Laurel Brown would be the next Tiger Cub on the scoresheet, taking advantage of a weak clearance and beating a defender to the ball before poking under Thomas.

Eva Battin put a bow on the conference title by scoring with the last kick of the match off a breakaway as Greencastle finished WIC play with an unblemished 8-0 record while North Putnam falls to 2-5.

The Tiger Cubs finish the final week of the season with back-to-back Matches at Danville Monday and South Vermillion Tuesday while the Cougars finish WIC play at Indian Creek Tuesday.