My house (maybe) is haunted

Ghosts have been interwoven into popular culture across societies for centuries.

The Ancient Roman magistrate Pliny the Younger detailed the story of Athenodorus, a Greek philosopher who was haunted by the spirit of a restless man whose body was unceremoniously buried. They have also been featured in some of the greatest English literature, especially the works of Shakespeare and Charles Dickens. In an older example, King Saul summons the ghost of the prophet Samuel in the Hebrew Bible.

From the Wild Hunt of northern European folklore to the local tales surrounding the Edna Collings Bridge, ghosts have remained a consistent social motif. As such, they have long been the subject of debate.

Paranormal researchers propose that environmental factors and impressions left by dramatic events contribute to what are called residual hauntings. Believers further propose that the dead can return to haunt a place where they were happiest in life. Here, they try to distinguish between a repetitive “ghost” and an intelligent “spirit.”

In contrast, some scientists declare that ghosts are merely the products of hallucinations and confirmation bias. Funny or not, a common line from skeptics is that there are some very “haunted” people.

The 18th-century English poet and literary critic Samuel Johnson wrote that, “All argument is against it; but all belief is for it.”

I myself am on the fence as to a belief in ghosts. Part of me wants to believe that some element of my personality can manifest after death. However, I am conscious of the fact that such paranormal matters have been manipulated by conmen, and that there still remains little truly objective evidence.

All things considered, I believe that anything is possible. With that in mind, I will go out on a limb and say that my family home on Franklin Street might be haunted.

I can relate one incident that happened when I was about nine years old. I was trying to sleep when I saw what I thought was a figure standing across my bedroom. Though I could not discern any features, it freaked me out enough to jump out of bed and run downstairs to get my parents.

It is easy to chalk this up to my imagination. But not long after I raced down the stairs, my sister came right behind me. As I remember it, she said that she had also seen a figure in her room. A skeptic could say this is confirmation bias, so this experience doesn’t hold much water as being paranormal. 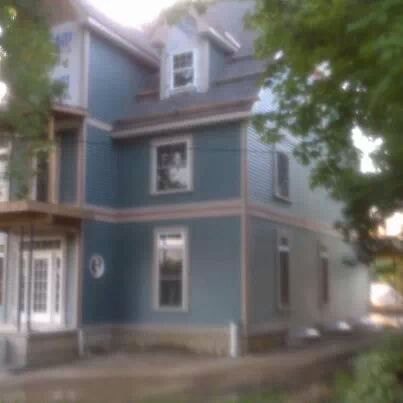 My dad captured an image I think is much more compelling during the time when the house was entering the middle stages of its reconstruction. If you look at the photo on the right, you can see what appears to be a misty figure looking from the second floor.

When my dad took the picture, he did not see the figure until someone else pointed it out to him later.

Even now when he tries to be humorous about it, I think that the photo still bothers him.

I am still not convinced that the figure is a trick of the light or a gap in the tree top. If it is a spirit, it might be that of one of the former owners who was watching over the construction. In some way, that possibility gives me comfort.

The photo is interesting for another reason. The room the figure is peering out from was my old bedroom, where I thought I had seen a ghost not long before. It is now my parents’ bedroom, and since moving back into the house, they have said that nothing out of the ordinary has occurred.

And if they do, it is only in jest. But I still remember my mom telling me that she used to see a rocking chair in the living room move on its own, or that she would hear footsteps that belonged to no one. Perhaps she was just pulling my leg.

Do you believe in ghosts? Have you ever had a paranormal experience or even seen an apparition? Let me know in the comments or on the Facebook page.

On this Halloween, don’t be afraid to let your curiosity run wild tonight. Who knows, maybe you’ll also see a figure in the window as you pass by our house.