Perhaps Gobin's bell tolled for us, too 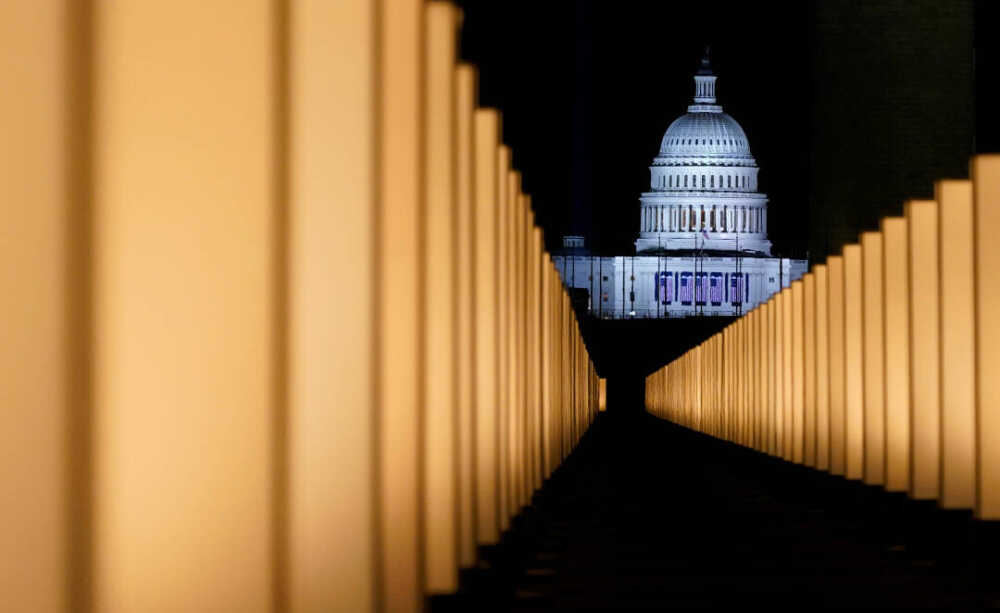 Lights shine along the Lincoln Memorial Reflecting Pool in Washington, D.C., Tuesday as a memorial to the Americans who have died from COVID-19. (Associated Press/Alex Brandon)

This week's blog was published in the Friday, Jan. 22 edition of the Banner Graphic.

When I went Tuesday evening to cover Gobin Memorial UMC's honoring the Putnam County residents we've lost to COVID-19, I didn't expect it to inspire this week's blog.

I expected to see a modest gathering of people when I arrived 15 minutes before the church's bell began tolling at 5:30 p.m. When it became apparent that I was the only one, I decided to get some photos of the bell tower and the building itself beforehand. If anything, I would have one to show for being there. It was about the effort for me.

I then saw Alisa Isaacs-Bailey, a member of Gobin's leadership team, come out of the church with a music stand. I saw her phone resting on it as she adjusted the height.

"That's exactly what I did," I said as she angled her phone up toward the bell tower. I decided to go back to the signs for Simpson and Locust streets. I figured that I needed the tower as the bell tolled. It wouldn't be an exciting photo, but that wasn't the point.

I did get that shot on the front page of today's edition of the Banner Graphic. Even so, I was humbled as the bell rang 47 times in groups of three. The chimes seemed serene, but were nonetheless to the point. I realized a little more just how lucky I was to have not been directly affected by this tragedy. There are many, many others who have not been so lucky.

As of Jan. 18, 47 Putnam County residents had died from COVID-19 complications, with two more deaths being accounted for on Wednesday. On the national scale, more than 405,000 fellow Americans have now died since the beginning of the pandemic.

As solemn as this time was, I expressed to Alisa how I was somewhat disappointed that no one came out for a vigil. She responded that one was not intended because of social distancing concerns. The Facebook Live shared the message where it had to go.

"Still, it shows that someone cares," I remember Alisa telling me, and she thanked me for coming on behalf of the Banner. This is all I can ever ask for as a local reporter. I have implied this many times before in this forum: We should be there when we can.

The bell tolled for those in our community who have died. I have wondered whether it also rang for each of us as community members, as family members and as citizens. Instead of being in solemnity, though, it could've been a ringing-in for a future's hope.

The inaugurations of Joe Biden and Kamala Harris as our nation's newest president and vice president came on the heels of a sectarian insurrection. This latest transition of power in Washington, D.C., comes behind the divisions firmly rooted within our national psyche, as well as the challenge of finally getting a grasp on the pandemic.

"It may not be who we want to be," Jared wrote in his most recent Last Minute Musings column. "It’s certainly not who we could or should be. But it is who we are."

Jared didn't have answers. I don't have any to account for what I've witnessed and felt as a journalist and within myself as an individual. I think we are all in the same boat.

However, President Biden suggested what the broad answer is not: Us turning inward.

"Here's the thing about life: There's no accounting for what faith will deal you," he provided. "Some days (are) when you need a hand. There are other days when we're called to lend a hand. That's how it has to be ... And if we are this way, our country will be stronger, more prosperous, more ready for the future -- and we can still disagree."

Many will not take the president's words here to heart because he is a Democrat. On the other hand, many progressives will label President Biden as a mediocre moderate. Still others will see him as just another politician in a wholly unredeemable system.

Peace comes with acceptance of this distrust, so long as it isn't allowed to devolve into prejudice and fanaticism. It is up to each of us to be vigilant. I think it is on us to not just hold each other accountable, but to try and be gracious toward others not like us.

When he visited DePauw University now almost two years ago, former Ohio Gov. John Kasich said something that I think strongly resonates in this moment of uncertainty.

"We want to know how we end this division in this country," he said about each of us enabling change. "It's up to us. Because power in the arena doesn’t come from the top, not from the president or somebody else. Power comes from the bottom, from you."

Gobin's bell tolled for those lost to COVID-19. Perhaps it tolled for the rest of us as well. We have a lot of work to do moving forward; and we have to make it all count.