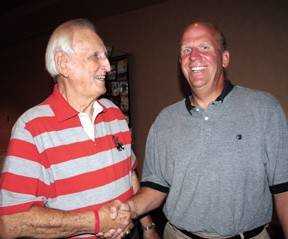 Terry Gobert of Jasper has been the head baseball coach at the city's high school for 20 years. He has taken home five state championships, the most current in 2006, and has recently been inducted into the Indiana Baseball Hall of Fame.

When Gobert stood in front of the podium at Wednesday's Greencastle Rotary Club meeting, he asked humorously, "What am I doing here?"

Gobert's speech took the Rotary club on a journey into his baseball career, starting with growing up in Greencastle.

"I had an absolute blast growing up in this community," he said.

A 1979 graduate of Greencastle High School, Gobert started playing baseball by joining little league and then advancing to high school baseball where he was coached by James Huter, who was also a guest at Wednesday's meeting.

"The man never played me a lick," joked Gobert as he looked at Huter, who retired as South Putnam's athletic director in 1994. "But the greatest thing I learned from him was 'You should never be out-conditioned.'"

Gobert said he took this to heart when he began coaching at Jasper. His teams have participated in nine total state finals.

"We won because we were in better shape," he said.

As for coaching, which he said he knew he wanted to do since grade school, Gobert said it can be tough, especially when he has to cut kids from the team.

"If you do what you feel is right," he said, "you can sleep at night."

Gobert has coached a total of four players who moved onto the Major Leagues. But he said the only thing he wants is for his players to leave thinking, "Man, I'm glad I did that."

Gobert said that after teaching for so long, he still asks himself every year what he wants to do, as if he had just been hired at the school.

One project he mentioned was the work and money that was put into the sports facilities at Jasper schools.

He said $70 million was spent recently for tennis courts, a swimming pool, baseball fields, and the like for the schools.

Gobert mentioned, as well, how money is raised for the facilities.

He said $25,000 was raised in one year for things such as the baseball stadium, which is school-owned and seats about 2,500 people.

"It's about the community," he said when speaking of the motivation. According to Gobert, Jasper schools offer their school facilities at all times and free of charge to the community.

"It isn't about the money," he said. "Kids are good. They're just waiting for somebody to help them."

Gobert went on to suggest to invest in schools. "Keep the faith in these kids," he said.

To sum up his coaching career, he said, "It's crazy, but it's awesome with all the kids."