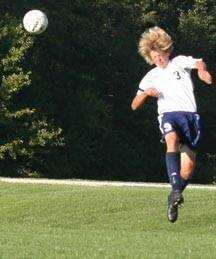 North Putnam's Kyle Smith delivers a header to a teammate during Thursday's 2-2 draw with West Vigo.

BAINBRIDGE -- Physical would be a good word to describe Thursday night's match-up between North Putnam and West Vigo boys' soccer. Late game heroics by the Cougars would leave the game knotted 2-all as the whistle blew.

The Cougars got off to a rocky start as West Vigo's Mike Bucur scored the first goal of the game with 36:16 on the clock.

Things didn't look much better for North Putnam as Chris Boyd pickup up a yellow card with 6:04 remaining on the clock. But the Cougars defense held strong.

In the second half, North got on the board as Dusten Breen scored off an assist from Shin Ryu at the 16:25 mark.

With North pushing deep into the Vikings territory, West Vigo committed a foul, setting up Mitch Hadley for a penalty kick. Hadley connected with the ball and sent a blazing bomb past the Vikings keeper to tie the score at 2-all.

When reflecting on the game, Moeller said he thought the team played better but still needs work.

"We've tried to work on defense. This game I thought we did a better job of containing, not stabbing them, playing better team defense this game," Moeller commented.

Next game -- North will host Crawfordsville at 12 p.m. Saturday.