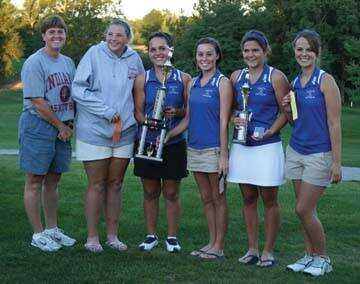 CLOVERDALE -- For a golf team seeking the Putnam County championship, having four of the seven all-county performers was probably a good place to start. 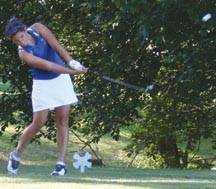 Putnam County champion Heather Hughes drives on the par three No. 14 at Clover Meadows. Hughes fired a six-over 42 Thursday to take the individual title by two over teammate Emily Zimmerman.

Hughes' 42 was good enough to beat teammate Zimmerman by two for the individual championship. Aker's 47 placed her fourth in the county.

Clark came from the number five position and shot her best score all season to place sixth. Steffy was pleased for her senior.

"Obviously, Chelsea Clark came up big for us with a 49," Steffy said. "It's the best score she's had all year. She was very pleased about that, too."

The Eagles' dominance can be seen when you consider that Tosha Fisher's 57 was thrown out, and yet she placed eighth in the county, just one spot away from all-county.

"I've said this before, but the hard work is paying off for our kids. They played a lot during the summer, they've put in a lot of hours during practice, and it's just nice to see that it is all paying off in these big meets," Steffy said.

The Tiger Cubs' second place finish was paced by Dana Norman, whose 47 earned her third place.

"I'm pleased Dana played another decent round. She came out and worked, and I think it showed," said GHS coach Brad Kingma.

Norman was joined on the all-county team by Chelsea Samuels, who placed seventh with a 52.

In spite of the two all-county performers, Kingma was disappointed with what he has seen in some of his team's effort recently.

"I wasn't pleased with some of our scores," Kingma said. "We've had some lackadaisical efforts the last couple of days in practice, and it showed tonight."

Rounding out the scoring for the Tiger Cubs were Ashlyn Archer's 62 and Kelsey's Murtagh's 63. Jessica Pasho shot a 68.

"We're pleased that second was our placing," Kingma concluded.

Clover coach Ken Williams was not happy placing third, but knows his team has been struggling with youth and a key injury.

"We didn't play well. We're not finishing very strong," Williams said. "We've got a couple of problems we're dealing with. Kate (Chambers) has an injury, and she can't play up to what she should be playing."

The bright spot for the Clovers was Kayla Langdon. The sophomore fired a 48, which was good enough for fifth place and an all-county medal.

Chambers had a 58. Paige Cassida (61) and Elizabeth Wiley (73) were the other two scorers for the Clovers. Jessica Hall had an 89.

The younger girls are trying, but we've hit a flat spot," said Williams. "When 80 percent of your team's in a slump, it's kind of hard to get things going. Four out of five are in a slump at this point. That's where we are.

"We've got one more day to go; we'll try to do it again," Williams said.

As for that one more day, the Eagles have their eyes on another prize. Saturday, all three teams will be playing in the Northview Sectional at Forest Park in Brazil.

"We're going to get ready for Saturday. We hope to do well," said Steffy. "Our goal is to finish in the top three as a team so maybe we can move on to regional. That's what we're looking at and that's what we're hoping for.

"Hopefully, this gives us a little bit of confidence going into it that maybe we can get that done," Steffy concluded.

Next match -- Cloverdale, Greencastle and South Putnam will all play in the Northview Sectional at 9 a.m. Saturday at Forest Park in Brazil.