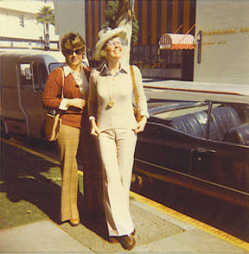 When Mary Anne Barothy was ten, she fell in love with Doris Day, the movie star and singer who loomed as large as any celebrity in Hollywood in the 1950s. Her parents and schoolteachers hoped that she would eventually grow out of her fixation on the wholesome blond starlet. She was, after all, only a little girl from Indianapolis.

But she never lost her affinity for Day's work and through a series of incredible events, she got to know Day on a personal level, working as her assistant for four years and living with her for two in the 1970s.

Barothy has written a memoir about her experience with Day, a book titled "Day at a Time: An Indiana Girl's Sentimental Journey to Doris Day's Hollywood and Beyond."

Barothy will be at Fine Print Bookstore from 2 to 4 p.m. Friday for a book signing and to talk about her story.

Throughout the book, the Indianapolis-native shares her insights working with Day in a Hollywood that was much more personable and accessible than today's paparazzi-riddled boulevards, Barothy said.

She first met the star, who was working on the Doris Day Show at the time, at a Hollywood bakery. Barothy developed a relationship with her through several chance encounters -- something she readily admits would never happen nowadays.

Barothy said her book differs from other biographies of Day because it focuses much more on the star's personality and day-to-day life than on her professional career.

But even all these years later, Barothy still finds her star-studded career in Los Angeles hard to believe.

"This was beyond any wildest dream I ever had," she said.