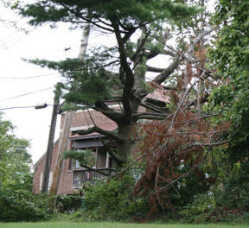 Sixty-mile-per-hour winds were a problem in Putnam County Sunday as residents across the county experienced energy outages throughout the night Sunday. These tree limbs are laying across lines along the right-of-way between houses on Melrose and Hillsdale avenues in Greencastle.

The company had about 110,000 customers out of service Monday morning including several in the Cloverdale and Greencastle area.

Winds up to 75 mph caused extensive damage to the power infrastructure resulting in outages in every district in the state. Putnam County residents who lost power were fully restored by Monday afternoon.

A representative from Duke Energy told the Banner Graphic Monday that there were zero outages being reported in the Greencastle area as of 11 a.m.

"This may be the most significant storm our company has ever experienced in Indiana in terms of number of customers affected at the peak," said Duke Energy Indiana President Jim Stanley.

"I also can't recall another storm where we've had so many individual cases of trouble, which makes power restoration slower-going. Many of the outages are from trees or branches falling into power lines. We're urging people to avoid downed power lines and not to try and remove trees or debris near those lines," he added.

The worse outages occurred in Southern Indiana in areas like Madison, Bedford and Bloomington. Customers in Huntington, Wabash, Brazil, Terre Haute, Greencastle, Lafayette and Kokomo all were left in the dark by Ike's remnants.

Duke offered some tips on what to do if you suffer an outage. They suggest you keep an emergency kit ready that includes flashlights; a battery powered radio, extra fuses, a wind-up clock and canned foods that do not require cooking.

Turn off or disconnect appliances that go on automatically when power is restores. This includes air conditioners, TV sets, computers and other electronic equipment.

If you see fallen electrical wires, assume they are "live" and stay away from them. Keep others away from wires and any other structures (fences, guardrails, gutters that might be energized because they are touching the fallen wires.

If a wire falls on your car, don't try to get out until help arrives. Stay in your car and ask a passerby to call the local utility. There could be energy running through the car and anyone touching it could be fatally shocked. Contact your local utility immediately and report the location of downed lines.

When power is out, only open your refrigerator when absolutely necessary. If the power is going to be out for more than a few hours, you can add ice to your refrigerator. Be sure to use a pan to catch melting water.

Depending upon how warm the room is, much of the food in your refrigerator will last only four to six hours without power. After six hours, throw away non-frozen perishables. If any food has an unusual odor or color, toss it out.

If your power is going to be off for an extended time, purchase dry ice. A 10-foot freezer with 25 pounds of dry ice will keep food frozen for three to four days and a half-full freezer for two to three days.

Be careful when handling dry ice. Do not touch it with bare hands. Use gloves or tongs.

If dry ice cannot be obtained, wrap your frozen food in heavy newspapers or a blanket to help prevent thawing.

If food has thawed only partially, there are still ice crystals, it may be safely refrozen. For meat or poultry that is thawed, but feels cool to the touch, cook and then refreeze.

Baked goods can be safely refrozen, even if completely thawed.

Do not refreeze commercially frozen dinners or other products. Cook and use immediately. Throw out any product that has even a slightly unusual color or odor.