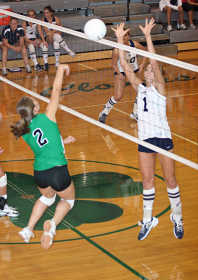 CLOVERDALE -- County rivals North Putnam and Cloverdale squared off Thursday, with the Clovers walking away with a three-game victory. Cloverdale won 25-13, 25-19 and 25-22.

The Clovers (13-4, 3-1 WCC) began the game strong, but a resilient North Putnam squad wouldn't go down without a fight. Cloverdale's mental lapses gave North Putnam openings that they eagerly took advantage of. Something CHS head coach Kathy Moore was not pleased with.

"I thought we played well at times," Moore said. "I'm still very concerned about the number of free balls that we have. Against a real aggressive team -- they will make you pay. That's what practice will be about tomorrow," she said.

In the opening game of the evening, Cloverdale jumped out to a quick lead and steadily pulled away from the Cougars. After the game was knotted at 5-all, Cloverdale built a lead of 19-7 and ultimately took game one 25-13 and looked poised to make it a short night.

Cloverdale's dominance of the first game resulted from their ability to cover the court and be in position to make the right play. Add to that some good net play from Elizabeth Cheatham, Alesha Evans and Breegan Andersen and it didn't look good for the Cougars.

"I thought we attacked the ball well at times and our blocks were fairly good tonight. Back row play was good and I thought that coverage of our hitters and blockers was pretty good. We had some really great saves tonight," Moore commented.

In game two, the Cougars showed they had more than a little fight left in them.

North Putnam started the second game down four points, but steady pressure began to turn the tide in favor of the Cougars. They fought back and tied the game 10-all. They stayed point-for-point with the Clovers, but communication difficulties started to take their toll.

Cloverdale pulled away from the Cougars and took game two by a margin of 25-19.

Communication errors plagued North Putnam throughout the match and cost them some much needed points. More than once, Cougar players watched as the ball hit the court, wrongly anticipating the actions of their teammates. Head coach Jill Schreiber acknowledged that her young squad is making strides yet still wants them to improve on the key element of communication.

"We are doing better at what we practiced on in practice and I'm proud of them for that," Schreiber said. "We just need to keep that momentum going and we struggle with that. We didn't talk too much tonight, so I don't feel like we communicated and worked together as a team. I think we were so focused on we want to win -- I think we were so focused that we lost what we were doing in the meantime.

"We're young and still learning; we're still getting things down that we should have known at the very beginning of the season, but the girls still work hard for me. They practiced hard and I couldn't ask for a better group of girls," Schreiber commented. 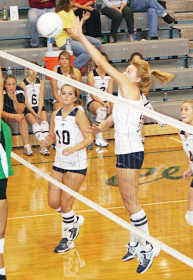 Game three turned out to be the strongest of the three for the Cougars.

The two squad went back and forth, with the Clovers holding a slight advantage over North Putnam for most of the match. Cloverdale built a four-point lead and didn't allowing the Cougars to get comfortable, but comfortable was not on the minds of the Cougars -- winning was.

Cloverdale held a 23-16 lead and that's when things started to click for the Cougars. Even though North Putnam began chipping away at their lead point-by-point, Cloverdale's net play proved to be the difference maker. Fittingly, it was a block from Cheatham that gave the Clovers a game three win and in turn the match.

Cloverdale had struggles again with their serve, something Moore addressed after the contest.

"Our serving was not very focused in game two. Serving is something you always work on and sometimes it gets neglected more than it should. It's a very big part of the game," Moore commented. "We've run up against some terrific servers this year and I want us to get to that point where we can be that aggressive serving."

When speaking of the season ending push into tournament play, Schreiber again addressed the problems that the Cougars had getting on the same page.

"(I think) talking to each other, knowing they're behind you and relying on your teammates to get certain ball, cover a blocker -- knowing there are people they to get that ball if it comes off," she said. "Communication is something that we need to work on still. Some games we have it and some games we don't and I would like to be consistent. We need to play our game and how we play."

Moore commended North Putnam for their effort in Thursday's contest. She noted that they continued to hustle throughout the match and how they never quit on the ball. Something she was pleased to see for their first year head coach.

Cloverdale will travel to Rockville at 6 p.m. Monday, while North Putnam will host Monrovia at 6 p.m. Tuesday.

Next match -- Cloverdale will travel to Rockville at 6 p.m. Monday, while North Putnam will host Monrovia at 6 p.m. Tuesday.