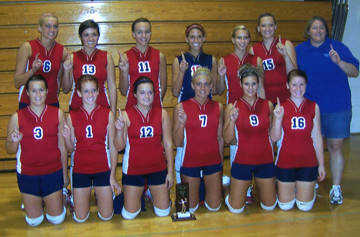 MONTEZUMA -- The South Putnam volleyball team stormed into the Riverton Parke Tournament on Saturday and came away with the title, only dropping one game along the way. The Eagles defeated Riverton Parke 25-13 and 25-23, and then defeated Eminence 26-24, 21-25 and 25-21. In the final match, South Putnam downed Broad Ripple 25-19 and 25-12.

"This was an exciting day for us. We played well all day," South Putnam head coach Jill Newton said.

In their match up with Riverton Parke, Katelyn Sibbett and Oceaia Boetjer combined for 19 points, five aces and 13 digs, while Brooke Boetjer added seven kills and eight blocks.

Eminence proved to be the Eagles' toughest test of the day, taking them to three games, but South hung on for the win.

Kaleigh Miller came through with six points, 13 assists, one kill and three digs, with Abbie Trauner adding seven points, two aces, seven kills and six digs. Ashley Wombles chipped in four kills, four blocks and one dig, while Rachel Egold recorded one kill and six digs to get the win.

After surviving a close game one with Broad Ripple 25-19, the Eagles defused the Rockets in the second game 25-12 to secure their tournament win.

Even though her squad struggled somewhat in the second game, Newton was pleased with the way her team rebounded and took care of things in the third game.

"We struggled a little bit with Eminence in the second game because of too many missed serves," Newton noted. "I was happy that we were able to come back in the third game without missing any. I thought the girls played together as a team and everyone played well. Our play is hitting a high when we want it to; going into the last part of the season.

"We hope to continue to play well, as we have several important conference games coming up in the next few weeks," Newton commented.

South Putnam will battle Cloverdale at home today at 6 p.m.

Next game -- South Putnam will battle Cloverdale at home today at 6 p.m.