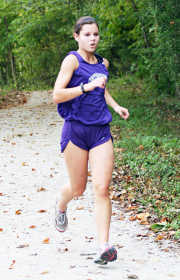 Greencastle's Olivia Humphreys keeps focus as she makes her way through the course at the DePauw Nature Park. Humphreys finished eighth in a time of 25:10

Greencastle junior Sara Culler capped her impressive '08 season by winning the meet with a time of 22:28. Culler ends the meet portion of the Tiger Cubs schedule with an undefeated record.

Following Culler was her teammates Kaitlyn Murtagh and Jamine Dwigans. Murtagh posted a time of 22:36, with Dwigans clocking a 22:56.

Greencastle had four more girls finish in the top ten on the evening. Emily Gill was fifth with a 23:48, Ivonne Martinez was sixth in a time of 24:24, Felicia Barger was seventh with the time of 24:53 and Olivia Humphreys was eighth in a time of 25:10.

With ominous, dark storm clouds looming overhead, the runners began the meet with temperatures much cooler from an earlier rain and the Greencastle runners took advantage of it.

"The meet tonight was run in almost ideal weather and temperature," GHS head coach Garry Anderson said. "I was pleased that all of our girls go their best time on this course tonight; our last meet of the year. This is going to be a positive for the upcoming tournaments."

For North Putnam, Paxton Stephenson and Whitney High led the team with top ten finishes. They posted times of 23:28 and 25:59 respectively. Elsiana Crosby placed 11th for North Putnam with a time of 27:03.

The Cougars attacked a course much different than the one they're used to and head coach Kevin Lutes believes that could help them with their big meets coming up.

"The course is tough; it's a lot hillier that what we're used to running at home, but we've been training for that," Lutes commented. "The kids did, at least from my point of view; they were pretty much on target. For us Monday meets don't work out as well as end of the week meets do, but all the kids came out and we had most of our kids running today and I was glad to see that."

Lutes alluded to the fact that their county, conference and sectional meets will take place at South Putnam, whose course is known for its hills and he's had his squad training with that in mind. He said it is what their focus has been on and he also noted the meet on Greencastle's course would help.

North Putnam will travel to Eminence to battle the Eels and Cloverdale at 4:30 p.m. Thursday, while Greencastle gears up for the Putnam County meet next Tuesday at 4:30 at South Putnam

At the DePauw Nature Park

Next meet -- North Putnam will travel to Eminence to battle the Eels and Cloverdale at 4:30 p.m. Thursday, while Greencastle gears up for the Putnam County meet next Tuesday at 4:30 at South Putnam