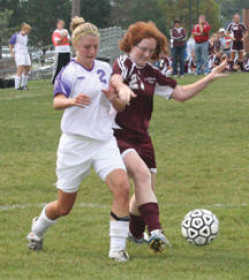 Greencastle sophomore Whitney Brotherton (2) battles with Danville's Jan Smither for ball control in the first half of Monday's match. Brotherton finished the night with a goal and an assist in the Tiger Cubs' 4-1 victory.

Just over five minutes into the second half Monday evening, the Greencastle girls' soccer team suddenly knew they were in a contest with the visiting Danville Warriors.

Having traded possessions in the first half, the Lady Tiger Cubs were able to carry a 1-0 lead into the break. But early in the second half, the Warriors took all that momentum back with a goal at the 34:55 mark of the second half and following it up with another nice opportunity that sailed wide 30 seconds later.

From that point, though, the Tiger Cubs were able to retake control and score three goals in 16 minutes for a 4-1 win.

GHS coach Maurice McKee was pleased with his squad's resilience and ability to make the game their own over the final 30 minutes.

"They were able to come back. They didn't give up," McKee said. "Sometimes teams will give up, but they knew they had plenty of time, and they worked the ball around and got the shots off that they needed and got back into the game. And then the momentum started, and there we go."

In the first half, both teams saw a number of scoring opportunities, but struggled to find the back of the net. The Lady Tiger Cubs got off shots from deep in Warrior territory only to have keeper Whitney Baenziger stonewall them.

With 18:33 it was a long shot from Greencastle's Laura English that broke through. The junior took a centering pass from Katie Farris and kicked a high shot that slid through Baenziger's hands and into the back of the net.

Tiger Cub keeper Jennifer Grumme also stayed busy in the first half, as she collected five saves before the break. Baenziger also had five stops.

Danville took control early in the second half, as Brooke Hadley tied up the score with 34:55 remaining in the game.

Things looked to be turning for the Warriors when they narrowly missed another shot 30 seconds later. But as McKee said, there was no panic in GHS. They soon retook control and the lead.

It was Whitney Brotherton who gave GHS the lead for good, as she bent an outside shot into the top-right corner of the Warrior net with 29:18 left to play.

Given Baenziger's ability to stop the close-range shots early in the game, the Tiger Cubs found success on their first two goals by mixing in shots from longer ranger.

Six minutes later, Greencastle added an insurance goal from Hannah Spencer. Although Danville's defenders had initially fended off an attack by Spencer and Brotherton, Hannah Serlin sent a long rebound back toward the goal which Spencer deflected in for a score.

At the 13:18 mark, Spencer scored on another rebound. After a Brotherton shot caromed off the keeper's hand and the cross bar, Spencer headed the ball in to make the score 4-1.

With a three-goal lead, McKee's club took over defensively.

"We're pleased with the way everything worked," he said. "We've been working on some defense and marking and not letting the girls turn and get shots off. That's been really killing us for the last couple of games, the turns in front of the goal. We have to mark them tight and close and not give up the turn."

Greencastle now prepares to host Cascade on Thursday. Not only is it senior night, but also an important WCC matchup.