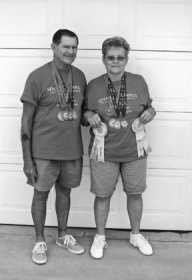 Shirley and Vern Grove stand with their medals won recently at the Senior Olympics in New Mexico. Shirley is a former resident of Greencastle

Vern and Shirley Grove participated in the state of New Mexico 2008 Senior Olympics.

There were 1,265 senior participants from more than 90 different communities and pueblos. The Groves qualified in their county to go to the state of New Mexico competition.

He and Shirley both came away with gold medals in playing partners in pickle ball.

Shirley received fourth place yellow ribbons in the 100 meter dash and throwing javelin for distance. The couple are qualified to go to the 2009 National Senior Olympics in Palo Alto, Calif.