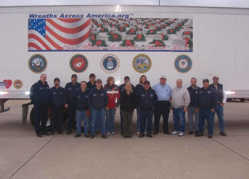 Wal-Mart transportation drivers Chuck McHenan and David Branch from Lewiston, Maine visited the Greencastle Wal-Mart Transportation Center with their Wreaths Across America load earlier this week. The two men took time to pose for a picture with Greencastle Transportation staff.

Since 1992, Morrill Worcester, owner of the Worcester Wreath Company in Harrington, Maine, has been sending a trailer load of wreaths to be laid on the graves at Arlington National Cemetery.

The company has donated 90,000 wreaths that have been placed by volunteers in a wreath-laying ceremony each December since 1992. As word spread, the mission to remember, honor and teach about the sacrifices made by veterans has captured the hearts and minds of many communities across the country.

In December 2007, 286 participating locations hosted Wreaths Across America ceremonies, overseeing the placement of 32,553 wreaths on the headstones of those who served and sacrificed for freedom.

In 2008, that number will exceed 350 locations and 100,000 wreaths placed in honor of veterans. The Wreaths Across America campaign is delivering 105,724 wreaths to 354 cemeteries across the nation this year. These will be laid at the graves of veterans with around 10,000 going to Arlington Cemetery.

Fifteen companies donated 25 trucks this year, six of those being Wal-Mart trucks. Two of the trailers made their way to Greencastle last Tuesday night.

Wal-Mart drivers Chuck McHenan and David Branch out of Lewiston, Maine stopped by the Greencastle facility on their way to Fayetteville, Ark.

"I had the pleasure of working with these two guys in Lewiston and they are very excited about the program. They are both veterans as well as Wal Mart Heart drivers," said Blake Schowe, general transportation manager at the Greencastle facility. "David said his involvement with the program comes from the heart."

Worcester Wreath Co. and many others have dedicated themselves to this project for many years to come. It is their vision to one day honor every veteran's memory for the holidays as a way to show gratitude and appreciation for the sacrifices made to preserve freedoms.

Wreaths Across America was formed as a non-profit in 2007, in direct response to the many letters and requests from supporters all around the country about how they too could get involved and bring the Arlington Wreath Project experience to their local communities.

If you would like to help sponsor one or more wreaths to be laid at one of the over 200 state and national cemeteries all across the Country, or would like more information about the program visit www.wreathsacrossamerica.org.