By IVY JACKSON, for the Banner Graphic 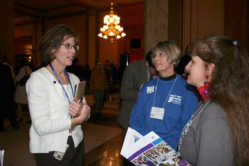 INDIANAPOLIS -- With snow falling, a small group of Clay County residents made the trek to Indianapolis to become advocates for Indiana cancer patient rights and smoke-free environments.

The ACS recently adopted the running theme of "Celebrate, Remember, Fight Back," and the group felt participating in the "Fight Back Indiana" initiative at the statehouse was important enough to ask for the day off from employers and school activities to be the voice of those who might not be able to speak for themselves.

"I've been here before," Hoopingarner said. "It's very important to do this."

While busy schedules didn't allow the group to meet with Waterman or Kersey, they were able to speak with Tincher and Michael between sessions at the statehouse Tuesday afternoon.

The topics of discussion were about two bills currently up for consideration by the legislature. One (SB 347/HB 1382) requires insurance providers to cover routine medical care costs for patients participating in clinical trials and the second (SB 282/HB 1213) would enact a statewide law to make all workplaces (including restaurants, bars and casinos) smoke free.

"It's very important for people," Tincher said when asked about how cancer had personally affected his life. "I had a sister who always talked about what she was going to do after retiring at 60-years-old. It was all she ever talked about, retiring at 60. She died of cancer at a day before her 60th birthday."

New to the State House, Michael explained she had not seen the ACS Cancer Promise yet, but confirmed she would support it.

However, Michael said she would support the exclusion of private clubs from the bill.

"I learned that during the fight in Greencastle," she said.

A Luminaria ceremony was planned at the statehouse, but due to the increasingly inclement weather the Clay County group was unable to attend.

"It was nice to put faces with the names of our legislatures and to really talk with them about the issues," Evans said. "This was a really great day. I'm looking forward to coming back next year."

Locally, the American Cancer Society is sponsoring its annual Clay County Relay For Life event May 8-9, from 6 p.m.-6 a.m., at the Clay County YMCA.

For more information about the event, to make a donation or sign up as a participant, survivor or team, visit www.relayforlife.org/claycountyin

Readers are encouraged to comment on this article at www.thebraziltimes.com