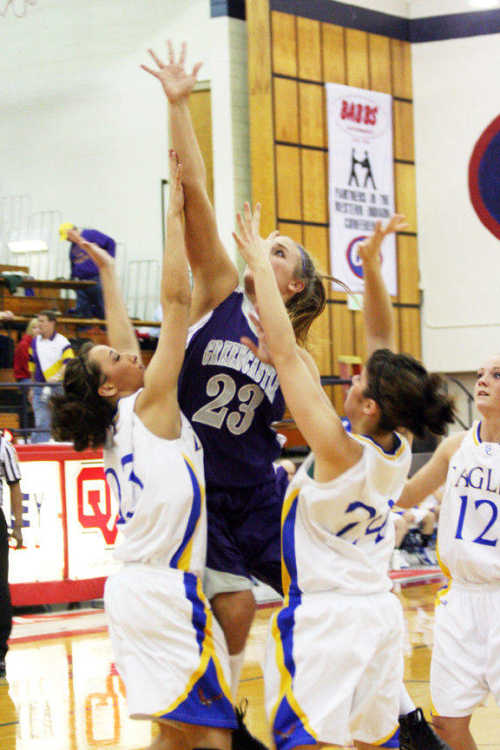 "It was good win for us," GHS head coach Glenn Hile said. "We let them control the tempo for darn near three quarters. We knew at halftime we had to go, and pressing them was the only way.

"Good defensive effort by us," he added. "I took a chance at the beginning of the game because we held them to 10 points in the first half the first time and we played our zone and they weren't going to have any of that."

Brown County made it apparent early that their gameplan was to control the pace of the game. The Eagles came out and held the ball, limiting Greencastle's touches and forcing the Tiger Cubs to play their game. The first half ended with a Kayla Nobles 3-pointer from the corner to knot the game a 12-all.

After the half, rallied by their coach, Greencastle took the floor and imposed their will on the Eagles. The Tiger Cubs displayed an aggressive defensive tone and made sure the tempo in the second half was going to be more to their liking.

In the first half, GHS made just four shots, and Hile knew it was going to take more buckets in the second half if the Tiger Cubs were to walk away with the win.

"We just had to hit shots," Hile acknowledged. "Mallory stepped up, Kayla (Nobles) hit a big one, Hannah (Spencer) hit a couple; we didn't really have much of a post game again tonight. They did a nice job inside on us."

Greencastle held a slight advantage over the Eagles after the third, leading 24-23, but the fourth was all Purple and Grey.

GHS outscored Brown County 20-11 in the final period, with senior Cassie Alspaugh sealing the win with six crucial free throws down the stretch.

Alspaugh also held Brown County's Kami Graber to 12 points and just four in the second half.

"Cassie did a great job on her (Graber)," Hile said. "She's turned into a big defensive player and the free throws buried them. She stepped up and hit the free throws."

The win was more than just a sectional win for Hile, it marked his 150th career win as a head coach.

"The kids knew it and they wanted to win real bad, because we want to go to that next step," Hile said

That next step will be against Edgewood in the second game of Friday's sectional. Greencastle met the Mustangs on Dec. 6, where they fell 46-35. The Tiger Cubs lost by 11, but Spencer, Miller and Becky Grivas were on the bench during the second half due to injury.

Greencastle will face Edgewood at the Owen Valley Sectional at 7:30 p.m.

Next game -- Greencastle will take on Edgewood at the Owen Valley Sectional at 7:30 p.m. Friday.