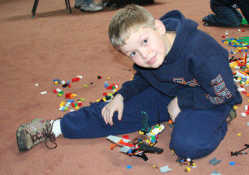 Marcus Greenburg shows off the Lego creation he built during a Brick Mania workshop. Several children enjoyed building from their imaginations or Lego kits Sunday at Greencastle City Hall as part of Brick Mania.

The floor just inside the entrance to Greencastle City Hall looked more like the living room where a child plays than a city government building. Lego building blocks were strewn about with the help of Greencastle Parks and Recreation Department.

It was for a good cause. Children of various ages were invited to participate in Brick Mania, a 2009 building brick series the parks department sponsored.

Children and their parents -- and some grandparents -- gathered in city hall from 1 to 4 p.m. Sunday to build something original or from a Lego kit. Adults could also sign the kids up for the building bricks series contest, which is still open to the public.

Contest entry forms can be found at City Hall and include general rules with a list of four divisions participants can enter. Judging will take place during the parks department's regular meeting March 4. 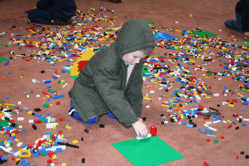 Jackson O'Neal enjoys building a Lego structure, which is in its beginning stages, Sunday during Brick Mania.

Parks and Recreation Assistant Director Cathy Stiles said small children (who have not yet entered kindergarten) are allowed to use Lego or Duplo for creations.

The series had included a building session Monday, but was canceled due to school being in session. Contest dates and deadlines still apply.

After the Legos were picked up from the floor of city hall, some displays remained on tables just inside the entrance. There is a Star Wars Lego display and an Indiana Jones Lego display for enjoyment. The displays are the work of the families of Stiles and Parks Director Roderick Weinschenk.

Lego contest entries will be on display all day March 4 at City Hall before judging that evening. Entries are still being accepted until 9 a.m. March 4, when forms and displays must be dropped off at City Hall. 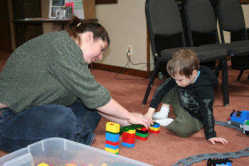 For more information about the Brick Mania contest, contact the parks department at 653-3395.