Greencastle falls to Northview by nine 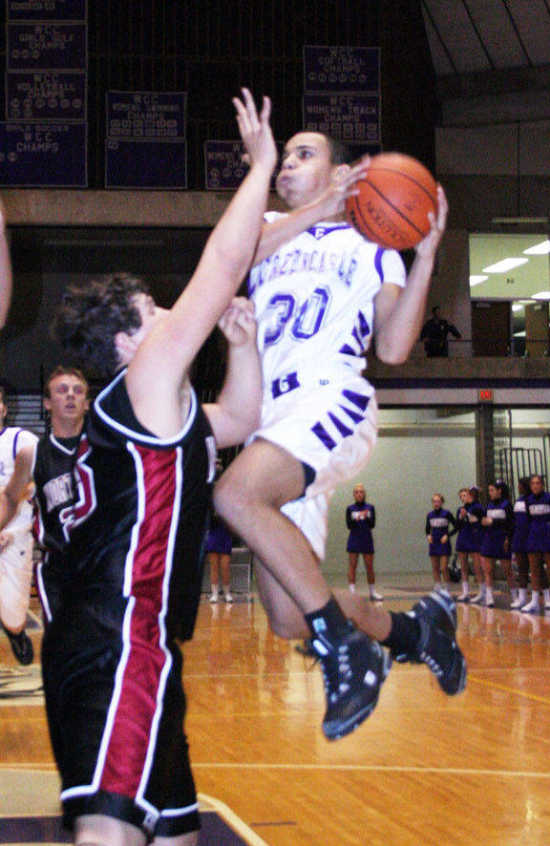 GHS junior Jordan Hickam glides past a Northview defender during Tuesday's contest. Hickam, along with Kyle Harlan led the Tiger Cubs with 11 points each in the loss.
Order this photo

It seems to be the tale of their season.

Greencastle fights to put itself in position to go for the win late, but comes up short. Tuesday played that story out to perfection.

GHS pulled close with just over five minutes to play and watched as Northview doubled them up to come away with the 62-51 win.

Greencastle (5-11) kept the game close throughout the contest and pulled within three at the 5:12 mark in the fourth quarter, but didn't have enough steam to come away with a win.

The Tiger Cubs were outscored 16-8 down the stretch, falling to the Knights by the final margin.

With 6-foot-6-inch freshman Nick Hutcheson out due to illness and Kyle Nobles on the bench in foul trouble, the Tiger Cubs struggled with the Knights in the paint.

With its two big men out, Greencastle used a smaller lineup that proved to be a double-edged sword. GHS was able to out-maneuvered Northview, but the Knights size played a major factor in the outcome of the game.

"I just felt like the only way we were going to get any pressure on them and give us a chance to get the game going a little quicker would be to play a smaller lineup," GHS head coach Troy Greenlee said. "At times it was good for us, at times we struggled because we struggled on the rebounds."

One of those players gobbling up rebounds for Northview was sophomore Jacob Musgrave. Musgrave set up shop in the paint and led the Knights in scoring with 24 points.

After trailing by three after one and eight at the half, Greencastle dug in and gave the Knights all they could handle in the second half.

As has been the case all season, GHS had guys step up, but Greenlee is having difficulties getting everyone to flip the switch on the same night.

"I still think we are struggling with getting everybody on the same night playing well," Greenlee commented. "We'll have two or three guys that play well and then we'll have a few guys that seem like they're not there. It just seems like it's different guys every night."

Greenlee has spoken about the importance of roles for his Tiger Cubs all season and Tuesday was no exception. He talked about how each player has a role and must exceed in that role for the team to be successful.

"It's just one of those thing where we have guys that understand that if they don't play their role to the best they can play it, then we're not going to be as good of a team," he said. "Whether that role is to get 10 rebounds a game or that role is to defend the best player on their team or whatever that role is, we have to have guys stepping up and accepting that role.

The coach also spoke of how pleased he was with his team's fight to get back in the game. Greenlee talked about how the team didn't give in until the final horn.

"I thought our kids fought hard to get back into it; we just couldn't get the hump," Greenlee commented.

Greencastle will head north to face Southmont at 6 p.m. Friday.

Next game -- Greencastle will head north to face Southmont at 6 p.m. Friday.