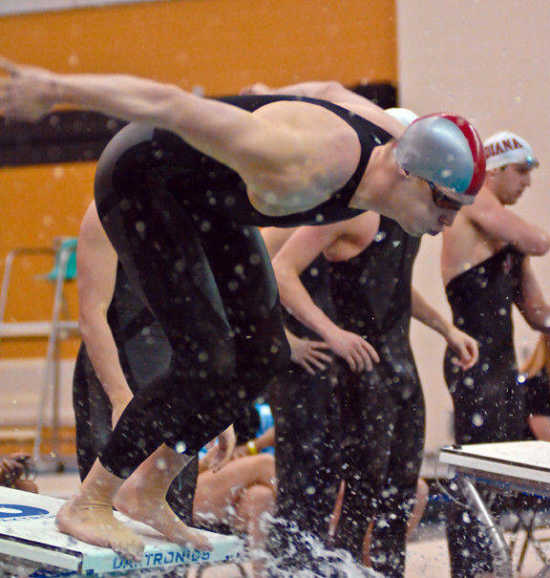 Andrew Bretscher explodes off the blocks during his leg of the 200-yard freestyle relay Thursday at the Big Ten Championships.

WEST LAFAYETTE -- He hasn't lost his edge. That is one thing you can say about Andrew Bretscher.

After trying to make the Olympic roster as a sophomore in college last summer, Bretscher returned to Indiana on Thursday where he and his fellow Buckeyes descended upon Purdue University to take part in the Big Ten Swimming and Diving Championships-- something he has been looking forward too.

"It's a lot of fun swimming in the Big Ten," Bretscher said. "This is the fastest swim conference in the nation, so it's pretty exciting."

But believe it or not, Ohio State wasn't Bretscher's first choice. He originally signed with Auburn University when he graduated, but found that he didn't it like as much as he thought.

"I really didn't like the coaching staff there or the program, so I decided to look at other schools that were interested in high school," Bretscher said. "After looking for a while I decided to go with Ohio State and I'm glad I did.

"I really like the program and the school here," he added.

Bretscher's pleasure with the programs seems obvious, as he has already recorded some of his fastest times of his career in several events.

"This season has gone well already for me," Bretscher said. "I've record my best times in the 100-meter butterfly, 100-meter backstroke, and the 100-yard freestyle.

"I just haven't swam those events yet and I can't wait to so I can go out there and do my best," he added.

One thing that Bretscher mentioned was that swimming at the collegiate level is fun; it takes a little while to get used to.

"It's a lot different," he said. "The practices are longer and there are more yards that you have to get used to swimming and you have to step up at every dual meet," Bretscher said. "It takes about a year to get used to, but after the first year it starts to become second nature to you."

When asked if he finds himself getting intimidated while swimming in the collegiate level he said no, but he did point out that it's not easy.

"I just go out there and swim my race," Bretscher said.

Brestscher will continue his quest to get a Big Ten championship today when he swims in the 100 backstroke and 100 butterfly today with the prelims starting at noon.