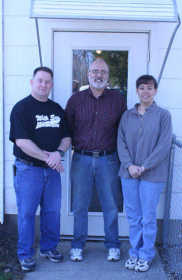 BAINBRIDGE -- A charitable organization is unique among human endeavors in that it is formed entirely for the benefit of others and its ultimate goal is to put itself out of business.

Jeff Fordice and Wendy Pearl, organizers of Two Fish Food Pantry, which opened Saturday at the Bainbridge Christian Church have kept these things in mind in their organization's fledgling stage. They wish their efforts weren't necessary, but they are responding to northern Putnam County's need in difficult times.

"I guess that's a good thing and a bad thing," he said. "I guess the real goal would be to have nobody that needed us.

"With the time that I put into this, I look at it as I might need someone's help someday," he added.

The genesis of Two Fish was in the right people finding each other at the right time. Pearl actually has a desire to start a much larger organization to serve the needs of northern Putnam County. She plans to establish a non-profit organization called the Everlasting Foundation.

"The whole foundation is set up because I don't feel there is enough set up here in northern Putnam County for the kids. The kids are roaming the street and it doesn't need to be like that," Pearl said. "I would like to do more things for the county. I want to establish a community center so the kids have something to do. In tough times like these, it's even more important."

But as with anything else, you must crawl before you walk. Pearl and Fordice chose to start a food pantry given the current economic situation.

"Jeff supports a lot of the things I want to do, even if they're bizarre," Pearl said.

At the same time, there had been talk at Bainbridge Christian Church of starting a food pantry, but the idea hadn't really taken form when Pearl and Fordice approached the church about the idea. With similar aims, the partnership was formed, with the church providing support and space.

"I would like to make a big thank you to Bainbridge Christian Church for opening this space to us," Pearl said. "Thursa Evens and Mark Hoke were instrumental in getting this thing off the ground."

And off the ground it is. Pantry clients enter through the back door on the north side of the church, located at 402 S. Washington St. in Bainbridge, and are greeted by a volunteer. The first step is to fill out an informational card with name, address, phone number, number of days of need and size of family -- information that helps determine the need.

For example, a family of one to three people would receive 25 points, one loaf of bread, three items to choose among school supplies and personal items and two paper products.

"It's a client choice," Pearl said. "It's like they're shopping for themselves. We're trying to offer them nutrition. Especially kids need nutrition. We're wanting to get them produce, bread, eggs and meat."

The distribution of food and supplies is only part of the story, though. The process requires donations of supplies and money as well as volunteer workers. While all donations are accepted, Fordice emphasized that monetary help goes a long way, given that the pantry is able to save money by buying in bulk or from Gleaner's Food Bank.

"If people give monetary donations, we can buy so much more than people can buy on their own, although food donations are still welcome," he said.

Volunteers are also encouraged, and the organizers have not been disappointed in the response.

"We'll take any help we can get, but we're almost overwhelmed with help," Fordice said.

Donations are also accepted the last Tuesday of each month from 6 to 7:30 p.m., but other arrangements can be made with Fordice.

The pantry is open to residents of Clinton, Monroe, Floyd, Russell, Franklin and Jackson townships (the North Putnam school district).

"You don't think about it until times get tough, but we've got friends and neighbors and families all around who need help who've never needed it before," Fordice said.

As long as the need remains, the volunteers of Two Fish hope to meet it.