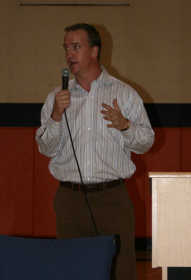 Peyton Manning speaks to North Putnam Middle School students about the importance of friends, hard work and staying humble Tuesday morning. Manning was a surprise guest at the school in honor of the students' good ISTEP scores.

"You had the best ISTEP scores in the county last year," principal Terry Tippin told the gymnasium filled with cheering students "You get to meet one of my heroes thanks to Olivia and Isabella Zarate's family."

Manning congratulated students on their test scores and told them it is never too early to set goals and have dreams.

He talked about the importance of choosing friends wisely; listening to parents, teachers and principals; and having fun.

Manning responded to several questions submitted by students last week who were not aware they might have their inquiries answered in person.

When asked who his role model was, Manning responded, "My father is my favorite player, my role model and my hero." Manning's father Archie played for the New Orleans Saints.

"My parents went to all my games. They didn't yell at the referees or the coaches. They sat up at the top of the bleachers with the other parents. They just tried to be there to support us," he explained.

Manning also told students to live their life now so they did not have any regrets later.

"Take 10 seconds and think things through before you do something you know might not be right. Pick your friends carefully and lean on your parents, teachers and principals for guidance," said Manning.

The star quarterback spoke warmly about his relationship with both his older brother Cooper and younger brother Eli, who plays for the New York Giants.

"Eli is five years younger than me. He's bigger than me now so I don't really mess with him anymore," laughed Manning.

He also described with warmth growing up and playing football with his older brother.

"My dad played for the New Orleans Saints, so we got to play football on their field when I was five or six," he added.

He reminded students to behave the same whether adults are around or not.

"Are you still doing the right kinds of things when your parents or teachers aren't watching?" he asked.

"It was probably the coolest thing I've ever done and I have done a lot of cool things," he said.

He told students his favorite states were Louisiana, Tennessee and Indiana and his favorite colors are blue and orange (which happen to be the North Putnam colors).

After leaving the gym floor, Manning told Tippin that North Putnam Middle School was the most attentive group he had spoken to and asked very intelligent questions.

"That's the best compliment he's ever given any school," said Tippin as he reminded students to continue to perform well on the next set of ISTEP tests coming in two weeks.