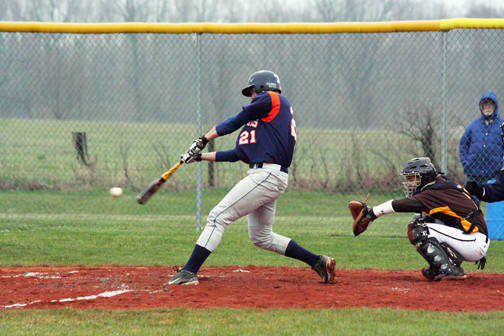 North Putnam's Griffen Dahlstrom smashes a triple during Tuesday's game with Speedway. The Cougar got the win 17-3 and will face the Sparkplugs tonight on the road at 5 p.m.

"Speedway came out on fire and I didn't think we were ready tonight, honestly," Cougar head coach Norm Fish said.

The Sparkplugs jumped out to an early lead 2-0 lead, but North Putnam came back to take the lead in the bottom of the first. Scott Hunt brought in Kyle Alcorn and Mitchell Crum with a sharp single to left field. Griffen Dahlstrom brought home Hunt with a booming triple to give the Cougars all the cushion they would need.

North Putnam grew its lead to 8-2 in the second, then a wild and woolly third inning took over the action.

Speedway put a run on the board in the top of the third, but their turn at the plate ended when Kane Kenworthy was gunned down trying to steal home. Sparkplug head coach Marcus McCormick stormed the field to protest the call and that was the moment the team came unraveled.

As the Cougars exploded, the Sparkplugs imploded. North Putnam scored nine runs in the bottom of the third, while Speedway committed six of their eight errors in the inning.

"Nothing was easy tonight with those field conditions. Like I said, like we got started, I didn't feel like we were ready early, Speedway looked ready."

North Putnam proved to be more than ready.

The Cougars took an extended trip to the plate in the third beginning with Crum and Tyler Watson reaching base on walks. Dahlstrom laid down a bunt to move runners, but due to an overthrow at first, he found himself on third and two more Cougar runs had crossed the plate.

Crum and Watson scored twice in the inning, with Dahlstrom, Brock Jones, C.J. Lofton, Darrick Wiatt and Kyle Alcorn accounting for the other Cougar runs.

"We got into it and things went our way. We had a lot of stuff that went our way and I'm glad we're on that end of it this time. We just had a lot of things go our way tonight and we'll take it," Fish commented.

Crum pitched five innings, posting eight strikeouts and allowed five hits. Crum had some mean action on the mound and Fish was quick to point out the fact that he got some pitches working for him on the night and put in a good effort.

After a dominating win, it would be easy for a team to let its guard down a bit, but the Cougars know that can come back to haunt them. When they load up and travel to Speedway tonight, Fish knows it will not be an easy task to post back-to-back wins over a conference opponent.

"We learned that lesson against Greencastle this year," he commented. "We 10-runned them on Tuesday and went down there Wednesday and we didn't make plays and lost the game. We know what can happen, so hopefully we learn from that Greencastle game and go over to Speedway ready to play because they're a good team."

North Putnam will travel to Speedway tonight for a 5 p.m. start.

Next game -- North Putnam will travel to Speedway tonight for a 5 p.m. start.