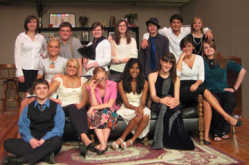 The cast of an unusually written murder mystery begin revolting against Agatha Crispy, a senile, formerly successful playwright under pressure from her literary agent Ruth Less in the South Putnam High School Drama Club presentation "Murder by Indecision." The play can be seen at SPHS on Saturday at 7 p.m. and Sunday at 2 p.m.

The South Putnam High School Drama Club will present the spring play, "Murder by Indecision," an Agatha Crispy mystery and comedy starring the senior talent of Tyler Heavin and Lindsey Hettich on Saturday at 7 p.m. and Sunday at 2 p.m. at the high school.

You get double the fun and double the suspense with this murder mystery comedy. Age has caught up with Agatha Crispy, the world's best-known mystery playwright, as she attempts to crank out her newest and last manuscript.

Senility is setting in and the words just don't flow very well. Ignoring her pestering agent Ruth Less, Agatha sits down to write, wrestling with her characters and babbling to her imaginary friend "Typy," the typewriter.

As she struggles through the first few pages of her play, Miss Maple, Inspector Dryfus and all her characters come to life on stage, and then crumple with every balled-up page tossed into the trashcan.

The play is written by Daniel O'Donnell and provided through Pioneer Drama. The play is directed by Tona Gardner.

When the wealthy, sinister Victor Greedly is murdered in his home, everyone seems to be a suspect. Despite his bumbling questions and incompetent assistant, Inspector Dryfus uncovers some interesting secrets and surprises when he investigates, but Miss Maple seems to be the one closer to actually uncovering the murderer.

However, she may not get the job done before the entire cast revolts against the befuddled writer Agatha Crispy, who gets sidetracked by her persistent literary agent Ruth Less, distracted by her cravings for tea, annoyed by children knocking on her door and misled by her own troubled mind.

Any fan of classic Agatha Christie mysteries will love this delightful spoof. Tickets are available at the door. Adults are $5 and students are $3. Children six and under are free.