By JASON MOON, For the Banner Graphic 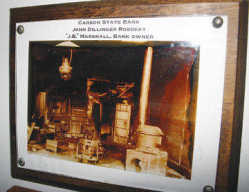 A photograph of the damage done to the Carbon State Bank following an alleged robbery by John Dillinger, hangs inside the Carbon Museum.

CARBON -- Clay County's ties to John Dillinger are deeper than just one of his confidants living here for a period of time.

In fact, a picture hanging in the Carbon Museum shows the aftermath of a bank robbery alleged to have been the work of Dillinger.

Lifelong Carbon resident Joan Rightsell said she didn't know who took the picture, but it depicts the inside of the Carbon State Bank following a robbery.

The bank was owned at the time by J.B. Marshall and sat on Main Street, where the Carbon Post Office currently is.

Rightsell said her father, Pete Dalton, talked to her about the alleged robbery.

Rightsell said the robbery took place in the evening and several items in the bank were knocked over.

The book, "Hoosier Folk Legends," by Ronald L. Baker, has an excerpt in it regarding Dillinger not robbing the Carbon bank.

The legend, according to the book, stated Dillinger walked into the bank to get change for some $50 bills he had stolen elsewhere.

The book also includes an excerpt regarding one of Dillinger's hideouts, Rocky Fork, which sits in Parke County close to a stone's throw from Carbon.