In these hard economic times, businesses frown on the idea of expanding because of the fear of going under. But for one Greencastle business, expanding was its only option. 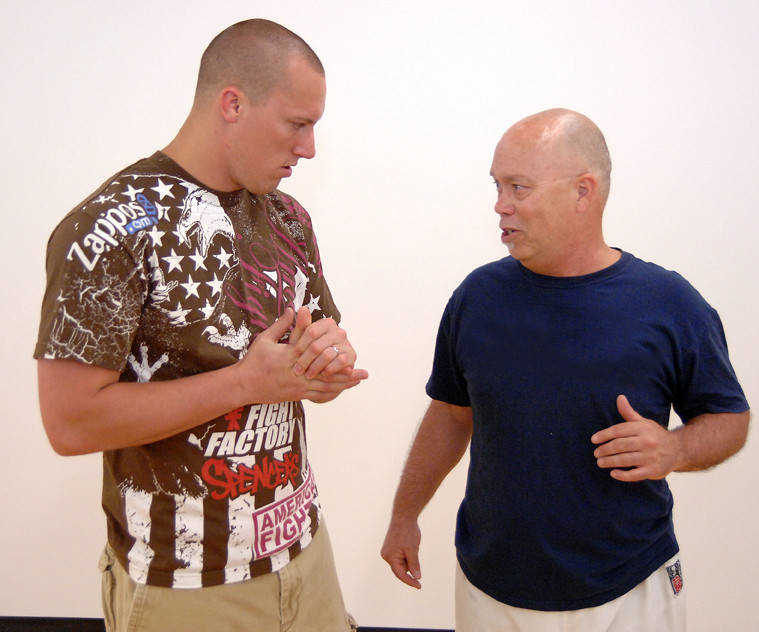 Kyle Gibbons (left) and Steve St. Pierre discuss MMA techniques and business in the new facility for the All American Karate Academy recently.

All American Karate, which has been located on Mill Pond Lane for the last six years, opened its new school in the old Marsh shopping center earlier last week.

"We had no other recourse," Steve St. Pierre said. "We were turning away students and putting them on waiting lists because we didn't have the room to accommodate them in our old school."

With the new building and all the newfound space, Niki and Steve finally have the room for all of their students, and will be able to expand the services that they offer.

"I want to offer programs that will be good for the community," Steve added.

"Of course we want to keep offering the quality martial arts training that has made us a mainstay here in the community, but we also want to approach fitness from a different angle as well," Niki added. "Like with the Pilates and yoga classes. We are even thinking about adding a Zumba class.

"We have been looking at the possibilities and talking to instructors that are certified in those areas to come here now that we have the space for it," Niki said.

When Steve and Niki were asked if they were scared about expanding, even though they were already established, their answer was kind of surprising.

"Six years ago, we moved into Mill Pond with only a desk and a phone and the next thing that happened with that was that we got a phone call from someone that just moved into the area and wanted their kids to study karate. I went, 'we got two students all we need to is 28 more to break even,'" Steve said. "Now we have around 102 students, so when we moved into this new school we already had a base to build on, which is cool. Was I scared, oh yeah. The economic times today are tough, but I think that they will get better, people are saying that it already is."

"We've taken a hit, not a big one," Niki said. "I think the way the world is right now, I think people are looking outside the box a little bit more and wanting to take care of themselves a little bit more so they don't have any extra medical expenses.

"People are thinking that things could get ugly out there so maybe they want to learn to defend themselves a little bit more than what they already know," Niki said. "I think families are cutting back on other things, like not going out to eat as much or the movies as often and some families are starting to use martial arts as their source or family fun and entertainment."

One person glad to see Steve and Niki expand is Gibbons.

Another thing Gibbons is happy to see Steve and Niki offer is their MMA class.

"It gives people another outlet instead of going out to the bars and getting into fights" Gibbons said. "This is a good place because Niki and Steve have been practicing their art for years, unlike some people you see around here that try to teach techniques they got form a tape or a book."

To help in training his students in his MMA class, Steve plans on putting a half cage against one of his walls in his school.

"That way the students can learn how to work off the cage," Steve said. "We're going to offer the MMA program, but it's not going to be our main concentration. This new school isn't just an MMA school. If it grows enough for we might look for an MMA gym to open. You never know. I mean the sport grows by leaps and bounds."

One thing is for sure; the All American Karate Academy in Greencastle isn't going away anytime soon.