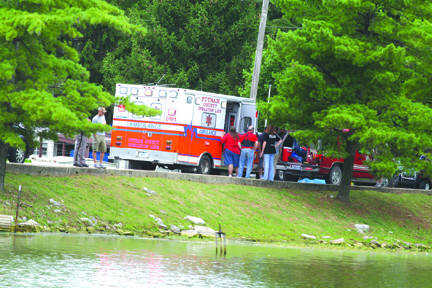 VAN BIBBER LAKE -- A Putnam County man died Wednesday after the kayak he was in capsized in Van Bibber Lake.

"Allen and his brother were kayaking on the lake when (Allen) began to experience an epileptic seizure and capsized the kayak," a news release prepared by Winchell said.

Detective Patrick McFadden of the Putnam County Sheriff's Department said an individual driving across the bridge at Van Bibber saw the two kayaks on the water with one overturned. The individual in the second kayak was yelling for help.

Allen's brother and another witness jumped in the water to help Allen and were able to get him to shore, Winchell said.

Emergency personnel arrived on the scene and began administering life-saving efforts, but Allen was later pronounced dead at the Putnam County Hospital.

Allen was not wearing a lifejacket when the accident happened, Winchell said.

Winchell said the investigation into Allen's death is continuing.

A representative from a local funeral home said members of Allen's family had begun planning arrangements, but that nothing had been finalized.