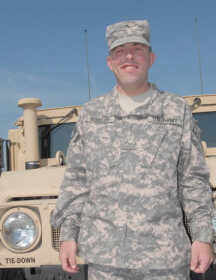 Bainbridge resident Sean McGillem will be heading for duty in Afghanistan in about two weeks.

BAINBRIDGE -- In about two weeks, Sean McGillem will leave Putnam County headed for Afghanistan, a country that is nearly 7,500 miles away. He is heading out with his National Guard Unit Passport Cyclone 38th Infantry Division.

McGillem is excited to be traveling over 7,400 miles to a country totally unlike the United States.

"I'm very excited. I like to help people and this is going to be a great life experience," he told the Banner Graphic Friday.

Officially the country's name is the Islamic Republic of Afghanistan and has a population of about 29,929,000. It is bordered by Iran on the west, Pakistan on the east and south and by Turkmenstan, Uzbekistan and Tajikistan on the north.

The 23-year-old Bainbridge volunteer fireman has a history of helping people. His father Robert McGillem works for the Salvation Army.

"As long as I can remember I have always tried to put other people before myself," he said.

He joined the National Guard at the age of 18 after attending school in Plainfield.

McGillem's unit's main mission is to assist the Afghan government with security, construction, economic and agricultural support, as well as, facilitate the reception, training, housing and sustainment of U.S. troops entering the country.

"We'll help them build roads and schools," said McGillem. "I'd like people to know that we are well-trained highly motivated soldiers who are going to go and try to make a difference."

McGillem's mother Lisa Wilson and younger brother Jeremy Wilson moved from Plainfield to Bainbridge a few years ago. They are sad to see their son and brother leaving, but are also very, very proud of him.

He also leaves behind a three-year-old daughter named Kyla.

"She knows daddy is going away but doesn't really understand," said McGillem.

He will be away for at least a year and plans to head to college upon his return.

"I want to go to college, complete my schooling and become a firefighter," said the young man who also loves to bowl.

Members of the 38th Infantry Division's Task Force Cyclone started their mobilization training on July 10 in preparation for their deployment to Afghanistan over the next year.

"We want to spend as much time as possible in Afghanistan. So we start the training early so that once we hit this mobilization station we're focused on the unit's collective training and we can focus on our mission when we get to Afghanistan," said Brig. Gen. Lonnie Culver, Task Force Cyclone Commander.

Soldiers have focused on individual training, weapons qualifications, to include squad automatic weapons and crew weapons, drivers training, medical training, Humvee rollover training and many other training tasks over the last year.

A departure ceremony is planned for Aug. 11 at Camp Atterbury for family and friends of the Unite Passport Cyclone 38th ID out of Stout Field in Indianapolis.