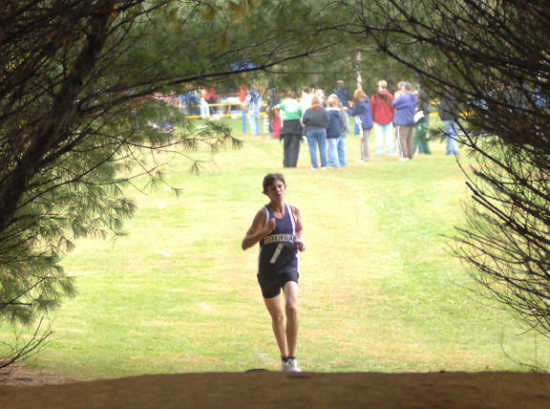 GREENCASTLE -- Not even the rain and mud could slow them down.

"This was a good day for us," GHS coach Mike Schimpf said. "I was a little concerned since the guys have had nearly two and half weeks off without a meet, so were not the sharpest we could be but we still ran well."

Greencastle finished with 16 points, one point away from a perfect score. Cloverdale's Joe Rumley cost Greencastle it's perfect score with his fifth place finish, a finish that was 11 seconds ahead of Greencastle's Hunter Mitchell who came in sixth with a time of 18:53.

Ryan Stevens led the Tiger Cubs with his 17:49 first place finish, followed by Ryan Gillespie who finished second with a time of 18:18, while Tyler Hudson wrapped up third place with a time o f 18:27:05 and Brad Haussin rounded out the top four for Greencastle with a time 18:27.69.

"The guys did it right tonight," Schimpf said. "We were without a couple of guys tonight. Nathan Eubank was out with a foot injury, and he is considered a top six finisher. I had another one not run because of strep throat.

"This was our best race of the season, but we need to be sharper for Saturday," Schimpf said. "Saturday is going to be a tight race."

South Putnam finished second in the meet with 48 points with Dylan Hayes leading the way with a seventh place finish with a time of 19:24.

"I'm really proud of Dylan for making the all county team as a senior," SPHS coach Brian Gardner said. "The rest of the guys went out hard and competed as well."

Cloverdale rounded out the team standings with a third place finish with 73 points and head coach Katie McLaughlin nearly speechless after the race.

"I wasn't expecting Greencastle to go one through four," McLaughlin said. "That was just shocking, but they train hard and deserve the spots they got.

"Joe ran a good time, not his best, but it was decent," McLaughlin said about her No.1's finish. "We are such a young team and I know this is disappointing to them now, but the future looks so bright for these kids and now we know where we need to go from here."

Officially the Cougars fielded an incomplete team and head coach Kevin Lutes knew that was going to happen Tuesday.

"Our No.1 runner was unable to make tonight because he was sick," Lutes said. "I think our boys ran well considering only one of them is a returnee and the others have never ran cross country or this course before. So we are still getting used to everything and I am pleased that everybody was able to finish.

"Next year should be better for us. We aren't losing anybody, so everyone will be back. So it will be nice to finish as a team," Lutes added.

All four county team are back in action on Saturday when they take part in the West Central Conference meet at South Putnam, starting at 10 a.m.

Next Meet -- All four county team are back in action on Saturday when they take part in the West Central Conference meet at South Putnam, starting at 10 a.m.