Asbury on the GHS Band wagon

GREENCASTLE -- The Putnam County Community Foundation announced that excitement about the GHS Band is building, and the Asbury Endowment for the Arts will grant nearly $800 to the GHS band for instruments.

"Jason Asbury is a vital philanthropic partner for the arts in Putnam County," said Elaine Peck, Executive Director of the Community Foundation. "He currently lives in New York City, but we stay in touch regularly so he can make informed decisions about supporting the arts here at home."

Jason Asbury graduated from South Putnam High School in 1991 and DePauw University in 1995. A gifted pianist and organist, Asbury was able to attend DePauw because of the Prevo Scholarship, established by Edgar Prevo. Inspired by the impact this scholarship made in his life, Asbury began working to build the Asbury Endowment for the Arts while still an undergraduate student.

"The creation and appreciation of art is essential to the human spirit," said Asbury. "I am glad to support the band because with all the funding cuts, public schools must obtain voluntary donations if they are to continue to provide the opportunities for rich learning experiences we have come to expect for our children."

In addition to the Asbury grant, the Foundation also reported that Tom Turk, a 1954 GHS grad who now lives in Nashville, Tenn., contacted the Foundation office to share his idea about an instrument donation initiative.

"Five or six years ago, I realized I would no longer be performing on the vintage Conn trombone I played in the Greencastle High School Band from 1949 to 1954," said Turk. "So I contacted the GHS Band director and donated the instrument to the school."

Turk suggested there may be others who have old band instruments in their closets they would be willing to contribute. Bob Hedge, GHS Band Director, said that donated instruments are very helpful.

"Unfortunately, due to funding challenges, we are not always able to use donated instruments right away because they first need to be refurbished, which can be costly." 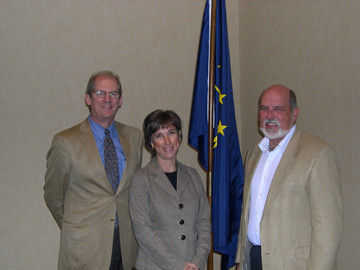 The GHS Band Fall Concert will be at 7:30 p.m. tonight in Parker Auditorium. Admission is free and open to the public. Proceeds from a coffee and dessert bar for the concert will benefit the band's new endowment. Contributions to the endowment will be matched 50 cents on the dollar by the Putnam County Community Foundation.

The Community Foundation administers more than 180 funds for donors, supporting a variety of charitable purposes. To learn more about this new fund, how to make a contribution, or how to start a new fund, visit www.pcfoundation.org or contact Eric Wolfe or Peck at 653-4978.