After the Storm ... the healing begins 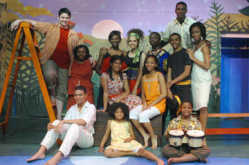 After facing the trials of Katrina, a group of New Orleans youngsters are able to come together in a production of the play Once on the Island in the new documentary After the Storm. (Courtesy photo)

It was the natural impulse to help when people witnessed the images of destruction that Hurricane Katrina wreaked on New Orleans come cascading over the airwaves. Flashforward two years and there are areas still decimated by the destruction, with help being slow to come and in some cases seemingly not coming at all.

New York theater alums James Lecesne, Gerry McIntyre and Randy Redd have seen the damage done by the storm and have set their sights on St. Mark's Community Center, a 100-year-old structure that withstood the storm, but was worse for wear in her aftermath. The trio decides to stage a theater production of Once on the Island, a story set on an Island where four storytellers attempt to sooth a small girl crying during a storm.

Obviously, the similarities between the story and what actually happen in New Orleans is striking and the three men hope to help raise funds for the community center to reopen and make some kids smile along the way.

As you watch the casting process and the children working to learn the play, it's obvious how much the hurricane affected them. At one point in the documentary, McIntyre decries "I've never been in a rehearsal situation where I've seen so many people cry". It's apparent that the thing most people overlooked in helping the New Orleans area was the people themselves

In video diaries, the kids describe their lives where parents reside elsewhere, seeing their first dead body and one young lady who has lost both parents early in her life. The children have a spirit that in unmistakable, but where the storm did the worst damage was to their psyche. It left a generation of youngsters as broken as the landscape that surrounds them.

As the troupe begins to fray to the point to where the play seems like it will be a disaster, something clicks and they all come together and bring down the house on opening night. They also learn following their opening night success that they've been invited to perform the show off-Broadway in New York.

The story that affected me the most was that of Griffin, a bright, clearly talent young man who hasn't seen his mother in eight months. When there's an opportunity for him to see her, he chooses to stay and rehearse with the group. Without his knowing, his friend Grant helps bring his mother to surprise him. When she comes in the door and surprises her unsuspecting son, it provides the most touching moment of the film for me.

After the Storm will leave you smiling as tears are welling up. At the beginning, the kids just want a sense of normalcy, but by the end, the purpose of the project has transformed them and they seem on their way to healing. The eventual camaraderie between Lecesne, McIntyre and Redd is touching and at times hilarious.

Final Cut: The film is a great example that no matter what happens in our lives, nothing can unwillingly break the spirit of the human condition. After the Storm is a moving documentary that shows despite the clean up, the healing process is far from complete. A real eye-opening, wonderful film.

Currently featured at the Heartland Film Festival, Oct. 15-24 in Indianapolis.