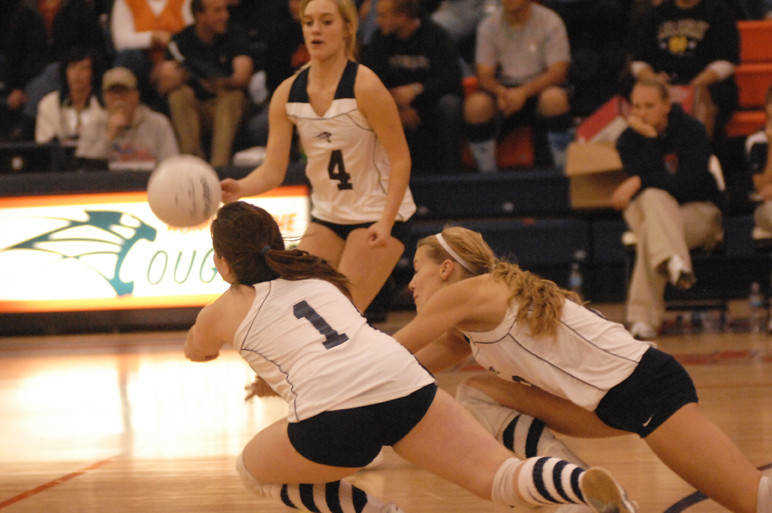 North Putnam's LeeAn Davis and Megan Robinson dive for a serve while Megan Gray looks on in the Cougars volleyball match Wednesday.

ROACHDALE -- They were doing it.

For the first time in a long time, the North Putnam High School volleyball team was actually working as a team. The Cougars had battled back after losing the first set, 25-21, and won the next two sets, 25-23 and 27-25. They even pulled off an eight-point rally towards the end of the second set for the win.

The determination and effort that the Cougars had in the sets two and three were gone and the South Vermillion Wildcats cruised the next two sets for the 3-2 win.

"We were playing as a team there in the beginning and then we just fell apart," NPHS Coach Jill Schreiber said. "It's that fourth and fifth game where we forget. We forget how to play as a team."

In the fourth game the Cougars came out flat, letting the Wildcats get out front 5-0 before they got a side out point and from that point on, it was a struggle.

The Cougars could only score one or two points at a time and never could really string together a big enough run to get back in the game. And when South Vermillion strung together another 6-0 run, taking a 17-6 lead, it was all but over for the Cougars.

"Once we stop hitting and getting our passes to our, setters we're done," Schrieber said.

The fifth set proved that theory right. The Cougars lost 15-5 in the last set and only had two kills in the game, which came from Paxton Stephenson. In the first set the Cougars lost, they had only seven kills, but they only lost the first set by four points. When they won the second set, they had eight kills and 15 in the third. But they only had a combined six kills in the last two sets.

"If we don't hit, we don't do very well," Schreiber said. " I was proud of them in those first three sets; it's just those last two sets we get worn our and I don't know what it is."

The Cougars are back in action Today when they travel to Speedway for a 6 p.m. match with the Sparkplugs.

Next Match -- The Cougars are back in action Today when they travel to Speedway for a 6 p.m. match with the Sparkplugs.