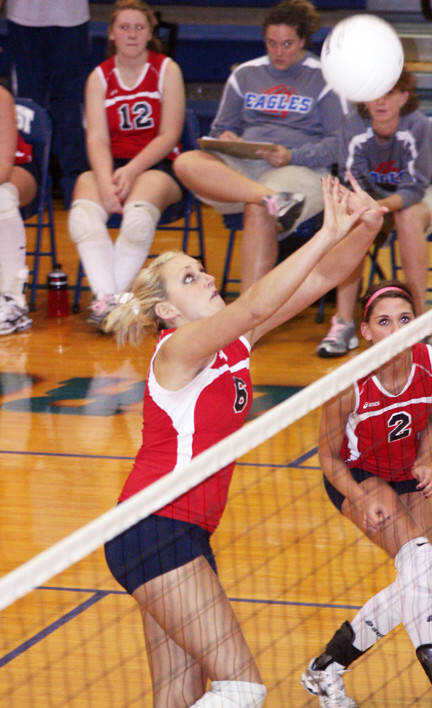 South Putnam's Brooke Boetjer pops the ball over the net in Tuesday's contest against Cloverdale.

LIZTON -- All teams know when the chill of October descends, the life of their respective seasons get shorter and shorter. The beauty and tragedy of the tournament is it's one and done, elevating the intensity of every contest.

On Tuesday, South Putnam and Cloverdale battled at the Tri-West volleyball sectional and, unfortunately, it was the end of the Clovers' season. The Eagles won in straight sets, 25-15, 25-14 and 25-16.

"It is a nice way to begin sectional," Eagles head coach Lindsey Blackman said. "We couldn't ask for a better start. It was fun for the seniors; I asked them afterwards if they've ever won one round in sectional and they said they hadn't, so that's good for them. I'm proud of the team for being able to do that."

South Putnam jumped out to a quick lead in the first set and built a lead of 13-5 behind aces from Emily Dabkowski and Taylor Goss. Another ace from Katelyn Sibbitt made it 15-6 and multiple Cloverdale errors ballooned the score to 20-11.

Following a Cloverdale point, South Putnam's Leanna Masters recorded a kill, Sibbitt connected on another ace and the Eagles came away with a first set win 25-15.

The Clovers committed numerous errors on the night, but with only one player on the court with sectional experience, head coach Alisha Polite thought her team played tough.

"We hustled," Polite said. "I had one girl that played in sectional game and she's my setter. Otherwise, I had a team full of girls have never had floor time in sectional. For them to come out and perform the way they did in their first time in sectional, I was very proud of them.

"They worked hard, they pushed," she continued. "We got down. Most of the points were us killing ourselves, getting down into big holes, but South Putnam wanted it. It's a loss, it's going to hurt, but I couldn't be more proud of them. 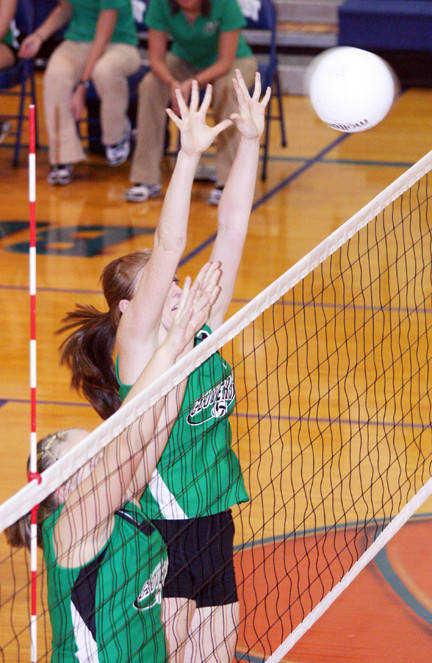 In set two, Cloverdale played the Eagles tight early, taking the lead on a Holly McCammon kill at 6-5. Unfortunately for the Clovers, South Putnam continued its aggressive play and began to build a lead.

Cloverdale had some strong moments in the second set. Stacia Shepherd powered a kill through a South Putnam block, but again it was errors and the Eagles aggressive play that would prevail.

Back-to-back points from Brooke Boetjer put the Eagles up 18-10. A Rachel Egold point propelled the Eagles on a late run, the end result was a Boetjer kill and a Goss ace. South Putnam won 25-14.

The final set between the squad saw the Clovers keep within one point of the Eagles for much of the early going, but South Putnam stayed aggressive and won the set 25-16, to move on to the sectional semi-final Saturday morning.

South Putnam didn't finish the season as strong as they would have liked, but an extended practice time and going back to what they do best gave them the edge in the first game of sectional.

"We didn't end our season on the best of notes down the stretch. I think the four days of practice that we were able to have at the end really helped us. We did a much better job of covering our blocks and our hitters and little things like that. And being aggressive that was a big thing," Blackman said.

For first year head coach Polite, the season saw its series of trials and tribulations. She spoke about the strides her team has made since their first practice together.

"I have seen them do a 180," Polite said. "I've seen them completely change, not just as athletes, but also as young women. That was the battle at first -- them getting to know me, me getting to know them -- the attitude factor. They are a group of very respectable young women that work hard and I applaud them for that. I applaud them for not giving up and sticking with me the entire time. I couldn't ask for a better group of girls."

South Putnam moves on to face Tri-West Saturday morning at 11 a.m. The Bruins defeated North Putnam in three sets to advance. The Eagles faced the Bruins earlier in the season and Blackman believes that if they play within themselves, they stand a good chance.

"Volleyball is such a game of momentum," Blackman said. "If we can be the tone setters and the aggressors, we have a much better chance. Then limiting our own errors, obviously no service errors and no silly hitting errors. Those are our two keys."

Next game -- South Putnam will face Tri-West at 11 a.m. Saturday.