By MIKE CLODFELTER For The Banner Graphic 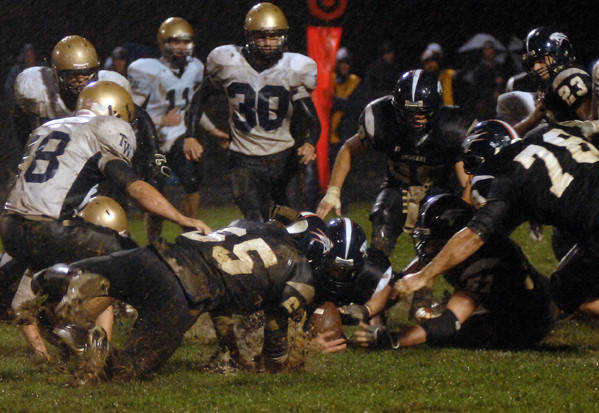 A gang of Cougars jump on a fumbled snap Friday night in the second quarter.

Rainfall throughout the day, and a downpour during the first half of the game, caused the weather and the playing field that had turned into a quagmire, to be more of a factor in the outcome of the game than either team's offenses.

However, North Putnam advanced to the championship game of the Class 2A Sectional 30, by defeating the Bruins, 4-0, forcing two Tri-West safeties in the second half.

Because of the weather and the field conditions, neither team was able to generate much offense throughout the game, but six big plays by North Putnam's defense and special teams proved to be the difference in the game.

Tyler Watson tackled the Tri-West quarterback for a safety for the first score of the game in the third quarter.

Finally, Caleb Vondersaar intercepted a Bruin pass with 56 seconds left in the game, ending any chance for Tri-West to score.

North Putnam generated 77 yards in total offense for the game. Similarly, Tri-West was only able to gain 67 yards in offense.

The weather and field conditions forced both teams to fumble the ball six times each, but North Putnam was able to recover three of the Bruins miscues.

North Putnam's alert and aggressive defense turned out to be its best offense in the game.

"In these conditions, you can't be sad about walking off the field with a victory, "North Putnam head coach Greg Barrett said after the game.

"We bent a little, but we didn't break, and Brock Jones' punt turned out to be the play of the game."

"I'm ecstatic right now, and I'm fired-up because these guys are going to be playing in the sectional championship game next week," Barrett concluded.

Spencer gained 49 yards on 19 carries to lead the Cougars in rushing. Travis Franklin followed with 17 yards on 4 carries, Kolten Everts had 14 on 13 rushes, and Darr Boruff had four yards on two carries, and Travis Kratt had two rushes for two yards.

Defensively, Boruff led the Cougars with nine tackles, Aaron Vondersaar and Watson had six tackles each, and Shawn Diebold had five.

Caleb Vondersaar had an interception of a Bruin pass.

The Cougars (9-2, 5-1 WCC) host the Monrovia Bulldogs Friday night to play the Class 2A Sectional 30 championship game. The game begins at 7:00 p.m.

Next Game: The Cougars (9-2, 5-1 WCC) host the Monrovia Bulldogs Friday night to play the Class 2A Sectional 30 championship game. The game begins at 7:00 p.m.