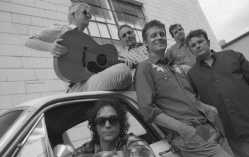 After more than a quarter century, the members of Blue Rodeo continue to make quality country rock. (Courtesy of PAI Media)

If you're like me and cut your teeth on the country music of the '70s and '80s, the sounds coming from the radio often leave you wanting.

The pop leanings of Nashville leave those of us desiring good rock or country rock looking elsewhere. Places like Austin, Chicago and St. Louis have provided their share of quality acts over the years.

With Tuesday's release of "The Things We Left Behind," Canadian outfit Blue Rodeo proves once again there must be something country in the water in Toronto.

With 12 records to their credit since 1987, Blue Rodeo is no stranger to roots rock fans. The new record finds another consitent effort from the quintet, fronted by songwriters Jim Cuddy and Greg Keelor.

"The Things We Left Behind" is ambitious, to say the least. Rather than a focus on singles, it's a 16-song, two record set available on two CDs or LPs. The set features two songs of nine minutes or longer in "Million Miles" and "Venus Rising."

The first song to really catch your ear is "Sheba," the fifth track on the first disc. The upbeat sound and smooth harmonies have this one sounding radio-ready.

Other standouts include beautiful ballad "Waiting for the World," the plaintive lyrics of "Arizona Dust" and the epic "Million Miles."

"All the Things That Are Left Behind" also provides an outstanding kickoff to the album, with Keelor's work on meletron giving the track a haunting edge before a guitar solo kicks things into high gear.

In the end, Blue Rodeo has given us an album that no one in Nashville seems to have the guts to make anymore.

Sure, the double record has its share of average tracks, but what I hear is a group of guys who could be settling into their easy chairs after a nice run. Instead, they continue to explore some of the strongest work of their career.

"The Things We Left Behind" doesn't achieve greatness, but a pair of talented songwriters, some masterful musicians and beautiful harmonies carry the album to some nice heights. Roots rock fans need to give this one a listen.

Blue Rodeo, The Things We Left Behind