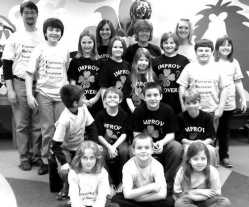 Destination ImagiNation(DI) is unlike other academic competitions. DI is the largest creative problem-solving competition in the world that fosters creativity, critical thinking, and teamwork in a timed setting.

Team "Improv Clovers" choose an improvisational acting challenge called Do or DI. The team had to create a five-minute improvisational skit about a threatened thing in danger of extinction. The team randomly selected a stock character and unimpressive superhero with only seven minutes to prepare their skit on the day of competition.

The team was given the California Condor and a superstitious stock character to base their skit on. Hannah Williams played an injured Condor, while her teammates acted out a dramatic and entertaining improvisational skit based on saving the endangered bird.

Team coaches Kim Rich and Regina Chestnut both agreed on, "How hard their team worked to prepare for the competition and that their team was amazing. "

Team CDI, Cloverdale Destination ImagiNation, chose a theatrical challenge called You're Gonna Flip! Team CDI had to create an eight-minute original story dramatizing how a character experiences a Flip, or a change of point of view, about someone or something.

As part of the challenge, students had to create puppets and a piece of live visual art that was to be completed during the performance.

The team wrote a play called "Good vs. Evil," in which an evil superhero puppet miraculously becomes a good superhero when he is hit over the head with a radar gun. The superhero puppet went on to save the day with the help of his superhero family by defeating a notorious robber.

"They renewed a spark in me with their display of creativity and imagination. I can hardly wait for next year," CDI coach Brad Sandy said.

CDI coach Jessica Suthard added, "Our team members are all outstanding role models for Cloverdale Elementary students. I hope that this team continues to compete in DI for years to come."

All team coaches expressed how proud they are of the students' dedication to problem solving, creativity, and teamwork to meet their DI challenges. Above all, everyone had fun!

A special thanks from Mrs. Rich to, Mr. Sandy, Mrs. Chestnut, Ms. Suthard, Mrs. Hall, Ms. Holley, Mrs. Tate, and Mrs. Ladd, "for volunteering to work in some capacity this year in our Destination ImagiNation program. The program is growing because more people are getting on board."