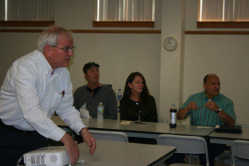 "Greencastle has a lot of old homes that are 50 years or older and a lot approaching 50 years," said Community Preservation Specialist Tom Balduf.

His presentation included styles from Federal, Second Empire and Greek Revival to Craftsmen, Italianate, Gothic Revival and others.

Many of the homes in his presentation were included in HPS' self-guided walking tour of homes of the Eastern Enlargement area of Greencastle.

A description of the Federal style of homes kicked off his presentation. These homes were usually simple ones made of brick or wood with symmetrical windows.

A good example of this style of home can be seen at 501 E. Washington Street.

The Second Empire style was popular from 1860-1885 and included mansard roofs, arched or hooded windows and dual-pitched roofs.

"Things were starting to get a little flamboyant toward the Victorian style," commented Balduf. "There are a lot of pretty fine examples here in town."

An interesting example of this is a red brick at 511 E. Washington. It was once a three-story home and was a fraternity at one time. It burned, and the home that stands now is one-story and what they were able to salvage from the fire.

Local historian and author John Baughman commented that a novel was even written about the home when it was a fraternity.

"Gothic Revival homes are mostly from 1840 to 1860," said Balduf. "These homes have a picturesque design, steep gabled roofs, with pointed arches for doors, windows or porches. They also have lacey, tracery work in wood and bargeboards."

Greencastle also has many interesting Italianate style homes. These were built from 1850-1890.

"There are also some great examples of these homes with their classic Greek designs with columns, pediments, and entrances with rectangular transoms," explained Balduf.

The Towers located at 701 E. Seminary was built by Frank Nelson in 1875. It served as the home for several DePauw University presidents, a fraternity house and is currently an apartment house. It is listed on the National Register of Historic Places.

Another home is Sunny Hill, owned and being restored by HPS President Phil Gick and his wife Georgiana. It is located across the street from Greencastle High School at 911 E. Washington.

The Stick style homes were prevalent from the mid to late 19th century. These houses have steeply pitched roofs with cross gables, overhanging eaves with exposed rafter ends. They have brace supports under the eaves, raised stick work on wall surfaces and wooden siding applied in varying directions.

A good example of this is the large white house on Washington Street across from city hall.

One of the interesting facts about the Queen Anne style homes (built between 1885 and 1905) were that many of the materials such as wood shingles, siding and masonry.

"These houses were meant to impress. The owners took great pride in their homes that were both large and small homes," said Balduf.

The Elms, the home of DePauw President Brian Casey is a classic example. There is a lot of symmetry with windows and chimneys.

Greencastle has several hundred examples of the Bungalow (1905-1940). These are simple forms usually with low side gable roofs.

"The most important thing to remember is that style itself is not so important as the quality of the house," said Balduf.

For information or a brochure about the self-guided walking tour of the Eastern Enlargement section of Greencastle call Heritage Preservation Society President Phil Gick at 848-1111 or e-mail him at phillip.gick@us.army.mil.