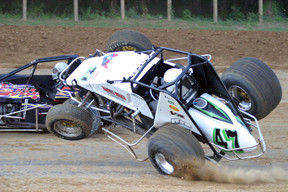 Justin Marvel stays on the gas despite a looming tumble in his sprint car heat race. Marvel did get upside down, but was uninjured in the crash.

PUTNAMVILLE -- One of the largest crowds in years was on hand to celebrate Independence Day at Lincoln Park Speedway on Saturday night.

A crowd of more than 2,100 fans was treated to an aerial fireworks show by Circle City Pyrotechnics and a field of more than 100 racers put on another thrilling show for a packed grandstand at the Putnamville oval.

Dickie Gaines was able to top a field of 36 sprint cars to claim his third LPS victory this season in the MPHG Promotions, Dan Roberts sprinter of Daryl Tate. In the UMP Modified feature, Chad Combs bested the field to pick up his first win at Lincoln Park Speedway this season. Steve Peeden repeated as the UMP Super Stock victor in a great race with Brad Cummings that went to the wire and Brazil's Ron Wallen Sr. topped the bomber field for a big victory in the L&R Roofing sponsored "Batmobile."

In the sprint car main event, Gaines started back in seventh after a runner-up finish in his heat race to Shawn Krockenberger. The front row was made up of Cam Schafer and Krockenberger with Ty Deckard and Billy Puterbaugh in row two.

From the drop of the green, Schafer set himself up front and was able to build a small gap ahead of Krockenberger with Puterbaugh and Deckard battling for third place. Behind them, a pack of sprinters jockeyed for clean air as Robert Ballou, fresh off a Friday win at Gas City, had Kent Christian, Gaines, Shane Hollingsworth and Danny Holtsclaw in tow.

After an early caution, Puterbaugh moved into a challenging position with a slidejob into the runner-up spot in turns three and four. A spin by Deckard brought out another caution and brought Schafer back to the field.

On the re-start, Schafer slipped over the cushion in turn four and opened the door for Gaines, who took over the top spot ahead of Puterbaugh. Hollingsworth had moved up to third with Krockenberger and Schafer fighting for fourth position.

Once he was out front, Gaines found his way to the cushion and wasn't going to relinquish a shot at his third LPS victory. He was flawless out front and was able to ward off Puterbaugh's advances down the stretch for the win as Hollingsworth maintained his points lead with a third-place ahead of Ballou and Holtsclaw.

Jesse Cramer took sixth ahead of Bub Cummings, who worked his way all the way up from 19th starting spot to take seventh ahead of Schafer, Christian, Ethan Barow and Krockenberger.

In the UMP Modified feature, Combs took the lead from the front row and didn't stray from the point despite late challenges from Craig Conyer and Paul Bumgardner to pick up the win in the Worland Farms, Jerry Burton Masonry, Greg Chucke, Van Horn Racing Graphics sponsored machine.

Combs took the green and set himself out front as Wes McClara stayed close behind with Carlos Bumgardner, Chris Brewer and James Tumey in tight formation fighting for the third spot.

Meanwhile, Paul Bumgardner, who suffered a flat tire in the heat race and qualified through the B-Main, was working his way through the field after starting 18th.

Combs had Conyer hot on his bumper for most of the race, but wasn't going to give up the top spot on this night. Carlos Bumgardner tried to make a late pass on the bottom under Conyer, but wasn't quite able to make it stick ahead of Brewer.

In the final five laps, Paul Bumgardner, was making the bottom work for him and worked his way all the way to a third-place finish behind Conyer and just ahead of Carlos Bumgardner.

Brewer nailed down fifth ahead of Tumey and Josh Boller with Roger Cary taking eighth followed by McClara and Dan Lewellen.

In the UMP Super Stock feature, Peeden again found the Lincoln Park dirt to his liking, putting on a side-by-side battle with Kris Starks for most of the feature before a mechanical problem slowed Starks in the final laps.

Cummings came forward to take the fight for the lead to Peeden after starting ninth in the feature. Josh Burton and Cummings were door-to-door for several laps ahead of Kenny Carmichael Sr. and Paul Bumgardner.

Down the stretch however, it was Cummings who took over second and tried Peeden on the bottom, but couldn't quite make the pass before a caution on the final lap.

Carmichael Sr. stays out front in the points with a 46-point lead over Griffin.

In the bomber feature, Wallen took the lead from the outset with Lloyd Walls in second as Larry Shelley Jr. and Dustin Shoulders fighting for the third spot.

After an early caution, Walls tried Wallen on the bottom in turns three and four, but Wallen was up to the task to stay up front. Shoulders charged forward into the fray and split Wallen and a lapped car on the front stretch to take the lead briefly. However, Shoulders pulled off the track a couple of laps later and Wallen wasn't going to let the lead go again.

Wallen held off Walls on a caution with two laps remaining to pick up the feature win with Kevin Kemp taking third ahead of C.J. Bryan and Frank Cotton in fifth. Richard Watkins placed sixth with Josh Presley, Corey Gregory, Shelley Jr. and Kenny Treash wrapping the top-10.

With the win, Wallen Sr. moves into third in the season points, 12 points behind Bryan in second. Walls remains in the top spot with 640 point.

Next week will be a card featuring sprint cars, UMP Modifieds, UMP Super Stocks and bombers. General admission for adults is $13 with kids 10-and-under admitted free.