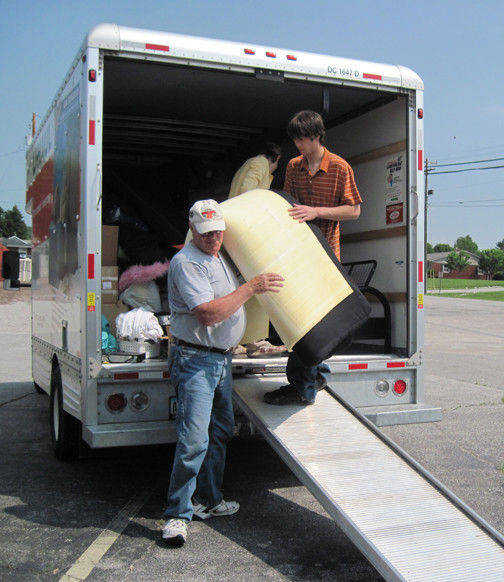 Jim King and Axl Overstreet, a student in John Garner's environmental science class at Greencastle High School, carry a futon mattress off a moving truck in May outside the former Brackney's Western Store in Greencastle as part of the Move Out Initiative put on by DePauw University and the Greencastle community. The 2nd annual program collected unwanted items from students moving off campus after the spring semester to give to those in the community who needed the items.

Program another step toward a greener Greencastle

GREENCASTLE -- Moving out has its share of unwanted furniture and appliances from students at universities, but one DePauw University intern found a way to put those items to use for the betterment of the community.

Missy Orr, a fifth-year sustainability intern at DePauw, worked with the Greencastle Sustainability Commission to coordinate the 2nd annual Move Out Initiative, which is an effort to capture materials in good condition from students moving out in order to donate to community families and organizations in need, earlier this summer.

"When a lot of students move out from DePauw, a lot of materials go to waste -- futons that just wouldn't fit in the car or a mini fridge you needed in your dorm room that won't fit in your new apartment," she said.

Orr and members of the Sustainability Committee, including Greencastle High School teacher John Garner and Joanne Haymaker, associate director of Financial Aid at DePauw University, gathered several interested groups from DePauw and Greencastle who developed the program as a joint community-DePauw initiative to collect all those materials that are in good condition and donate them to community families and organizations in need.

As a fifth-year sustainability intern, a post she will hold until the end of August, Orr focuses her efforts on reinforcing a positive community-campus relationship as well as promoting sustainability and green initiatives in Greencastle.

"It's a win-win-win-win. No matter how many sides there are, it's all win," she said.

The first year of the program in May was dedicated primarily to logistics, so it wasn't as big as what she knew it could be, she said.

For this year's initiative Orr and members of the Sustainability Committee took all the feedback from volunteers and rearranged the schedule and received an increased number of items including 11 futons, four chairs, three mini-refrigerators, 50 backpacks and purses and 77 coats.

While the idea of "freecycling" is by no means a new or novel idea at other universities, Orr said, she attributes the program's success with how much it works with the community and the Sustainability Office and Environmental Club at DePauw

"We had so much help we almost didn't know what to do with it all," she said.

The group stored items at the former Brackney's Western Store and received $100 in funding and volunteers from each Kiwanis, Civic League and Rotary for both years of the program to purchase the use of U-Haul trucks to transport items in early May.

Move Out was able to help 11 families through Family Support Services, the Humane Society, Goodwill, the Senior Center, A-Way Home, the Putnam County Library and the Cloverdale United Methodist Church.

Cari Cox, director of Putnam County Family Support Services, said the program enabled her office to be more beneficial for her clients who are in need of basic furniture and appliances and allows for more time for intervention services.

"For families that need this kind of support, we don't have to worry about if the children have cups, glasses, blankets, a bed or things to eat on and we're able to do the job we're intended to do with domestic advocacy and visitation," she said. "[The Move Out Initiative] met a huge need for families who are very much struggling in this economy."

Cox said she was personally thrilled with the number of towels, washcloths and bedding items collected as part of the program. Orr said among other items, Move Out was able to gather 25 blankets, 50 pillows and 11 futons.

"So often we would go into a home with people sleeping on just a mattress, and blankets are hard to come by," she said. "For some it's like going into a furniture store and shopping for free items."

Cox said she plans to work with the program again next summer.

"What we do is link families with resources in the community," she said. "I'm thrilled DePauw students take initiatives to locations to be given to the community.

Orr said she has high hopes for the future of the program, which she hopes will expand in number of volunteers and items next year.

"It really has turned into a successful, whole community initiative. It's great to work as a total community towards the betterment of the community," she said. "We would love to see it turn into a longstanding tradition."

If you would like to volunteer next year, make monetary donations to support the process, or have recommendations of how Move Out can be better, e-mail missy.orr@gmail.com or jgarner@bpl.coop.