GREENCASTLE -- Lights lit up the catwalk in the West Community Building at the Putnam County Fairgrounds, and girls participating in the fashion revue event took to the stage to show off both their wearable creations. 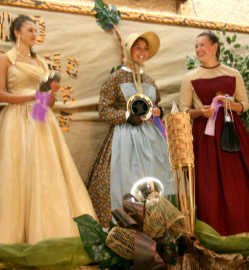 Clad in coordinating separates, formal wear and period clothing, the girls modeled their purchased outfits and hand-sewn wearable pieces for an audience of about 180 Monday night.

But as a third year Fashion Revue participant, Michala Cowley said a lot more than just shopping and sewing goes into the event before she walked onstage in front of the crowd.

Cowley completed a series of activities that took her about a month to finish, she said. In the process she learned about the care of her clothes, quality clothing construction and fit and the return of fashion trends from earlier generations through an interview with her mother.

"She was talking about the clothes that she wore and I found that teenagers still wear those things today, like button-down collared shirts," she said.

Cowley won a ribbon in the consumer category and enjoys making jewelry, some of which she wore to go with her white shorts and plaid top.

Cowley also participates in photography, but said Fashion Revue was one her favorite 4-H projects because it complements one of her favorite hobbies.

"I love to shop. It's my favorite thing to do. Every weekend, it's 'When can we go shopping, Mom?'" she said. 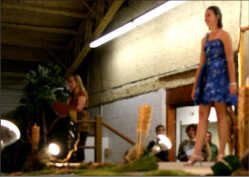 As part of her job as assistant superintendent and volunteer organizer for the event, Tara Baugh makes sure all the awards, ribbons and plates for the project are coordinated; all the participants' helpers are on hand for the event and know when they need to be stage-ready.

Baugh was also a fair queen in 1990, so she knows how the event and practicing the "catwalk walk" works, and helps the girls who ask for it before the show, she said.

"Usually the older girls don't ask, but younger girls a little more nervous because they've never done something like that before," she said. "I usually take care of it with individuals before they're getting ready for the event."

Evans also stressed the importance of volunteers and mentors in participating in 4-H projects such as the Fashion Revue.

"Volunteers are what make 4-H go, and if it's not for people that come and do these workshops, it wouldn't be possible," he said.

Baugh said parents and other family members are additional key facets of what make the fashion show a successful learning process for participants, although she has noticed a shift into which categories girls are entering due to geography, economics and changing times.

"In Greencastle, there are no places to buy material. You have to leave town to buy material. There's no home ec, so they don't really teach sewing there," she said. "If you don't have a parent or a grandparent around to show you how to sew, there's no one there to show you.

"We're lucky to have some parents who still do that."

As for the importance of events like the Fashion Revue, Evans said it goes along with some of the core values of 4-H and preparing participants for the future.

"It's part of building self-confidence, which is important for employment," he said. "When you're applying for a certain event you'll know how to present yourself."

Some of Monday's winners: